Australia exports 46,399t of canola in July ahead of clouded new-crop outlook

AUSTRALIA continued its pattern of a lone bulk cargo per month in July with exports totalling 46,399 tonnes, down 20 per cent from the June figure of 57,810t, according to the latest data from the Australian Bureau of Statistics (ABS). 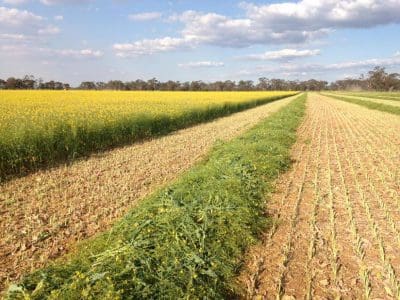 This canola crop in central Victoria is one of many being cut for hay.

Australian Oilseeds Federation (AOF) executive officer, Nick Goddard, said such low exports at this time of year, as old-crop supplies ran down, were not unusual, and the market was now looking at prospects for the drought and frost-affected new-crop.

“A key factor in our export surplus will be the demand from east-coast crushers, and the likelihood of them having to bring in seed from South Australia and Western Australia,” Mr Goddard said.

“It’s been done before, and if one crusher does it, that might leave enough seed in eastern states to supply the others.”

All of them, perhaps bar GrainCorp Oils, are expected to have to look further afield than normal to fill their crush requirements due to adverse weather preventing planting or depleting yields

“Domestic demand for canola will be driven by the demand for oil, and while there’s been firmness in prices for canola meal for stockfeed, it’s just one of many ingredients available for the mix.”

“We’ve already seen a lot cut for hay, and some growers who might be looking at yields as low as 0.2 tonnes per hectare after these frosts are going to be thinking these crops have more value to feed to sheep.”

Mr Goddard said the hot and dry summer in Europe, a major market for Australian canola, would bolster its demand for oilseeds, and China could well seek increased supplies as its trade dispute with the US continued.