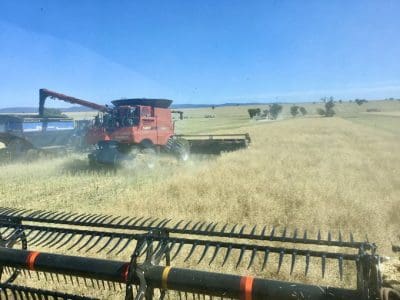 A DRY SPRING in almost all growing areas has prompted the Australian Oilseeds Federation (AOF) to cut its estimate for Australia’s 2019/20 canola crop now being harvested to 1.9 million tonnes (Mt) from 1.72 million hectares (Mha).

These figures have been released in the AOF’s latest Crop Report which was compiled last month, and shows the tonnage estimate has been cut by 21 per cent from 2.4Mt forecast in the initial 2019/20 estimates released in July.

AOF’s latest figures also show a 13pc drop in forecast area from 1.98Mha in July, as some paddocks have been abandoned, grazed out or cut for hay due to poor yield potential.

“There is expected to be more downside than upside as failing crops continue to be cut for hay,” AOF executive officer Nick Goddard said.

“The occurrence of a number of days of very hot weather during pod fill is expected to also reduce oil content, particularly in WA.”

However, canola production in eastern Australia as produced in New South Wales, Victoria and South Australia at 1.1Mt is forecast to weigh 25pc more than last year’s.

This will go a long way to supplying crushers in NSW and Victoria, although Mr Goddard said seed would still need to be brought east from South Australia and possibly WA in a repeat of last year.

“The return of China to Australian canola this year is a new demand component, and will most likely provide a price support for both east and west canola that was not present last year,” he said.

All canola growing regions experienced below average rainfall in the flowering and pod-fill period.

Victorian crops and some SA crops at least had some stored soil moisture to draw on, but southern NSW crops had no reserves.

“For NSW crops not cut for hay, the crop and oil yield can be expected to be poor.

At 1.9Mt nationally, Mr Goddard said the 2019/20 crop was still “way ahead” of the canola volumes harvested during the millennium drought, when production got down to 500,000 t in 2006/7, and versus the eight-year prior average of 1.5Mt.

Conditions in NSW were particularly harsh this spring.

“As the growing season progressed, so too the canola crop line progressed south, such that in the approach to harvest, viable crops down to the Murray were exhausting the last of their stored moisture,” Mr Goddard said.

“The dry air also supported a number of frosts in September-October which served to further reduce yield potential.”

While AOF’s initial 2019/20 estimate estimates the average NSW yield at 1.1t/ha, the most recent figures have factored in a yield range of 0.3-2t/ha, with smaller seed size and low oil content expected.

The stressed crops provided a viable feed source for insects, and most crops taken through to grain have been sprayed for aphids and heliothis.

In contrast to NSW, the Victorian canola crop has continued to do well, benefiting from good moisture stores throughout the season, and topped up with regular, albeit below-average, rainfall.

“This enabled crops to cope with the drier and hotter than normal October.

“The Mallee district started the season well, but it contracted the NSW drought contagion from across the border and began to dry out as the season progressed, leading to a number of crops being cut for hay.”

Mr Goddard said the Wimmera and south western Victoria had a typical season which looked excellent when compared with NSW.

Some crops in southwest Victoria have had so much rain they became waterlogged in spring.

South Australia overall has had a good season, and is expected to deliver an average yield of around 1.4t/ha, and one of the biggest canola harvests seen for years.

“This was despite a very hot October — decile 10 in many cases — which will have knocked the top off some of the yield potential.”

Crops on the Lower Eyre Peninsula (EP) have benefited from stored moisture, and could yield up to 3t/ha in some districts, while in the Upper EP, crop conditions are reported as being poor.

“The Mid North is okay, but drying out rapidly, with some crops certainly cut for hay.”

The lower South-East has had a very good season, and caught falls from a series of rain-bearing fronts.

Despite a dry October, good yields of around 2t/ha can be expected.

In WA, production was always going to be down based on a smaller planted area than last year, and the late break.

Drier conditions have exacerbated the situation, with yields well below average.

“However, canola invariably surprises on the upside in WA, so, as is often the case, forecast canola volume may rise.”

Harvest is all but over in the Geraldton zone, with yields close to 1t/ha in the higher-rainfall areas, and higher closer to the coast, all well above earlier estimates.

Further south, harvest will get under way now that WA’s barley harvest is drawing to a close.

In the Albany zone, a dry October during pod fill will have reduced overall yield and oil content.

Conversely, rain in October in Esperance provided the crops with a final top-up ahead of harvest, and should see average yields achieved.