It outlines specific steps to manage blackleg and includes cultivar blackleg ratings and resistance groups for all canola cultivars including new cultivars which will be available in 2017. 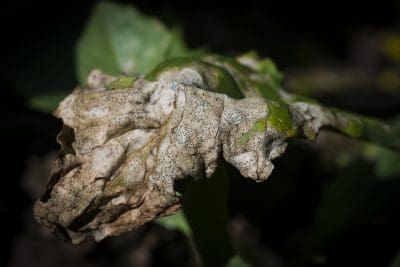 The resource can help growers assess if they are in a high-risk situation and guide them to minimise future yield losses.

Determining levels of blackleg disease in canola crops this spring can assist growers to plan ahead and reduce their risk of the disease in coming seasons.

Blackleg is a sexually reproducing pathogen that will overcome cultivar resistance genes and is more severe in areas of intensive canola production.

Oilseeds disease authority Steve Marcroft, of Marcroft Grains Pathology, said to assess disease levels in current crops, samples could be taken any time from the end of flowering to windrowing (swathing).

“Pull 60 randomly chosen stalks out of the ground, cut off the roots with a pair of secateurs and, using reference photos in the GRDC fact sheet, estimate the amount of disease in the stem cross-section,” he said.

“Yield loss commonly occurs when more than 50 per cent of the cross-section of the cut stem is discoloured.”

Dr Marcroft said if growers identified that they were in a high risk situation, they should use management practices – outlined in the fact sheet – to reduce blackleg severity for coming seasons.

“They should also rotate between cultivars with different resistance genes to reduce the probability of resistance breakdown and reduce disease severity,” he said.

Dr Marcroft said if growers identified that they were in a low risk situation and had not identified yield loss due to blackleg infection when assessing their crop, they should continue with their current management practices.

The fact sheet is available at www.grdc.com.au/GRDC-FS-BlacklegManagementGuide