Overnight rain to spark germination of most WA winter crops

RAIN ACROSS the Western Australian grainbelt overnight will be enough to get most of the state’s dry-sown winter crop up and away, and has provided a welcome drink for crops which germinated earlier. 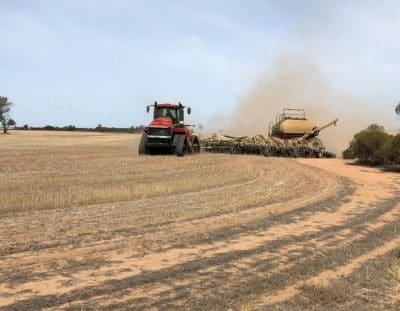 Dry sowing of canola at Marchagee in WA. Photo: Pioneer

While falls in the low-rainfall eastern wheatbelt were generally below 10 millimetres, most of the central wheatbelt received 10-25mm, and areas adjacent to the west coast got up to 30mm.

Vision Agribusiness Services consultant, Chris Wilkins, Badgingarra, said rain in the past 24 hours had been excellent for most parts of the WA wheatbelt.

“I doubt whether there would be five per cent of the state’s crop out of the ground, and it’s probably been the largest dry-sown crop in WA history.

“This is the germinating rain we’ve been waiting for, and most people will finish sowing in the next seven days if they haven’t finished already.”

Mr Wilkins said the Grain Industry Association of Western Australia (GIWA) May estimate for canola plantings was likely to be revised down in June following dry conditions in early and mid May.

“Canola plantings were planned to be down 5-10pc on last year, but it’s probably going to be more like 10-20pc down because we got through most of May without a planting rain.”

Mr Wilkins said growers with area left to plant would be likely to opt for barley, and very little extra canola was now expected to be planted.

“Barley plantings are up substantially already, and I think they’ll go up even more.”

He said yield prospects for wheat and barley crops were on track to produce average yields, but the delayed start for many canola crops meant average yields were already unlikely.

Parts of the Esperance zone, and the eastern edge of the wheatbelt will need further rain to ensure crop establishment, and Mr Wilkins said the next forecast low-pressure system could deliver.

Esperance grower Ashley Reichstein said around two-thirds of his family’s crop was “up and away”, mostly on their sand plains country.

“The rain hasn’t gotten to us yet; hopefully it will by next week.”

Mr Reichstein said some of the region’s growers were now dry-sowing their last 20-30pc of winter crop.

“In the Esperance area, our traditional break doesn’t come till about now, and we’ve been lucky in the past few years to get our crops established early, so this year might be the reality check.”

While cereals could be expected to make average yields, canola’s performance was likely to be affected by the break coming a few weeks later than it has in recent years.

Grower, agronomist and chair of GIWA’s oilseed council, Michael Lamond, said most of the rain fell in the state’s northern and western growing areas, and dwindled east of a line from Dalwallinu to Narembeen and Kellerberin.

“It didn’t get to Esperance or Lake Grace.”

Mr Lamond said growers in the eastern Kwinana zone could now be expected to abandon some of their dry-sown or intended areas unless they get rain in coming days.

“They’d be likely to fallow it over to next year, and just keep the weeds under control. If they don’t get rain soon, they will drop off area.”

Mr Lamond said WA growers ideally planted canola in April and early May, and some had kept their options open to transfer struggling canola area to barley.

“If they didn’t sow it with a herbicide that prevents them from planting barley, they might go for less break crop area, and more barley.

“As you go later, the probability of getting a profit from lupins and canola drops off, so they might decide to go with a cereal that has less yield risk attached to it.”

More rain is forecast for WA’s growing regions into next week, but amounts look limited for the eastern verge of the Kwinana zone.

According to the Australian Bureau of Meteorology, rainfall totals in farming areas in the 24 hours to 0900 WA time today include: