Agronomist and cropping manager Andrew McFadyen said the farm’s ‘backbone’ crop, sorghum, produced some of the best results he had seen.

“It wasn’t a brilliant season in rainfall terms, but we managed to grow handy dryland crops due to timely in-crop rainfall and smart paddock preparations,” he said.

Kurrajong Park features 12,500ha of hills and undulating valleys for sheltered grazing for cattle and sheep, and 5500ha of broadacre plains of deep black soils ideal for summer and winter cropping. 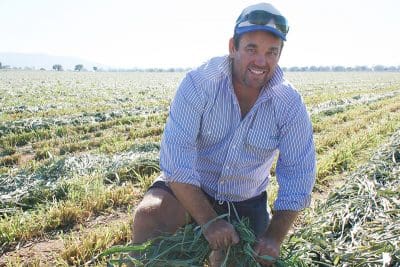 “The 1665ha of grain sorghum again proved a pillar crop in our rotation, especially on the long fallow, with top end yields of 8.4t/ha for MR-Taurus, while MR-Buster was just behind it,” Mr McFadyen said.

“We also planted 35ha of Superdan 2 forage in October because it’s tried and proven in this area for hay, and we were shoring-up supplementary feed for weaner cattle,” he said.

The first cut was in early January and the second was in March, with both cuts having a high yield.

“The later frosts also gave us an extra six weeks grazing, so we were able to graze bulls on the regrowth until May,” Mr McFadyen said.

Sheep and cattle are generally grassfed on temperate pastures and subtropical grasses, but are also supplementary fed on grazing oats, dual-purpose wheat and forage sorghum when seasons allow.

“We target 20,000 tonnes of grain per year consisting of summer and winter cereals, oilseeds and pulses which offers flexibility and diversity in the cropping rotation,” he said.

“You want diversity in the cropping rotation, so over the years we’ve grown crops like wheat, canola, barley, oats, sorghum, chickpeas, corn and mung beans. Not all of them have stayed on in the program, because you have to factor in moisture, prices, paddock rotation and so on.

“We will be keeping sorghum in the rotation for sure, due to the yield, standability and versatility of the crop, and add in other crops when the need arises.”

Paspaley Pastoral is part of the Australian family-owned Paspaley Group, which has interests in pearling, aviation and property.

It currently operates four properties in NSW, with Kurrajong Park considered the jewel in the crown.