A PHOTOSYNTHESIS discovery at The University of Queensland may help breed faster-growing wheat crops that are better adapted to hotter, drier climates.

A research team led by Queensland Alliance for Agriculture and Food Innovation researcher Professor Robert Henry has published a paper in Scientific Reports showing that photosynthesis occurs in wheat seeds as well as in plant leaves. 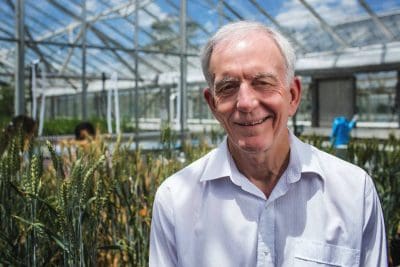 “This discovery turns half a century of plant biology on its head,” Professor Henry said.

“Wheat covers more of the earth than any other crop, so the ramifications of this discovery could be huge. It may lead to better, faster-growing, better-yielding wheat crops in geographical areas where wheat currently cannot be grown.”

Professor Henry said the work built on a biological discovery in the 1960s at the old Colonial Sugar Refining Company in Brisbane.

“Many said that discovery should have won a Nobel Prize,” he said.

“The Brisbane researchers at that time demonstrated that sugarcane and some other tropically adapted plants had evolved a different photosynthesis pathway than that seen in around 85 per cent of plants.”

“Our research characterised a previously unknown photosynthetic C4 pathway in the seeds of wheat – which is not a C4 plant.

“This has never been known before, yet the wheat seed is quite green when you peel it off and it is the last part of the plant to die.”

Professor Henry said photosynthesis – the process by which plants converted sunlight into energy for growth and produce oxygen – was arguably the most important biological process on earth.

“Wheat has the classic C3 photosynthetic pathway in its leaves, however C3 plants, which include rice, are less efficient in hotter, drier climates,” he said.

“The holy grail of plant science has long been to bioengineer the photosynthetic pathways in C3 and C4 plants to grow larger, more productive crops that are better adapted to climate change and boost food security.

“The population of the world’s tropical regions will soon exceed that of the rest of the world, and this discovery may be important in growing food to meet future demand.”

Professor Henry said the discovery was quite unexpected.

“We were looking at the genes in wheat seeds and all the computer systems kept coming back with these C4 genes, which we thought must be wrong because wheat is not a C4 plant,” he said.

“Eventually we discovered wheat does have all these C4 genes in different places, on different chromosomes. It’s never been known in wheat.”

Professor Henry said wheat had been cultivated for 10,000 years and it had always been a C3 plant.

“Wheat’s photosynthetic pathway evolved 100 million years ago when atmospheric carbon dioxide levels were up to 10 times higher than they are today,” he said.

“One theory is that as carbon dioxide began to decline, the plant’s seeds evolved a C4 pathway to capture more sunlight to convert to energy.”