SOUTH Australia’s winter crop now being harvested is forecast to weigh in at a record 12.1 million tonnes (Mt) to break the previous record of 11.1Mt set in 2016-17, according to the Primary Industries and Regions SA State Crops and Pastures – Spring Growth 2022 report issued last week.

The report said the forecast has been driven by an ideal spring finish for a crop generally of good to excellent condition.

SA’s area planted to wheat in 2022 was near average, like last season, but high canola prices have prompted an increase in its area at the expense of barley this year.

The decline in pea area continues to a record low this year, and disease pressure on some legumes resulted in crops being ploughed in and paddocks resown with cereals.

Hay areas are down due to the second year of low demand for export hay.

The 2022 growing-season rainfall from April to October ranged from above average to well above average inthe Mallee, but average over parts of the Eyre and Yorke peninsulas and the South East.

Above-average rainfall for August-October was due to repeated rain and storm activity, and rainfall in the first three weeks of November alone was well above the monthly average across SA’s cereal zone due to rain and storms.

Despite damaging flooding January rains filling soil profiles with moisture, the late arrival of opening rainsin some districts delayed seeding, and near-ideal conditions in winter and early spring allowed all crops to catch up.

Crops are in good-to–excellent condition, ranging from late grain fill in later-finishing districts to ripe and ready for harvest elsewhere.

Crop harvest and hay baling has been delayed by repeated storms and rain, with some reports of crop damage due to strong winds, heavy rain, with hail in some districts.

Some of the grain harvested so far has weather-related quality issues. 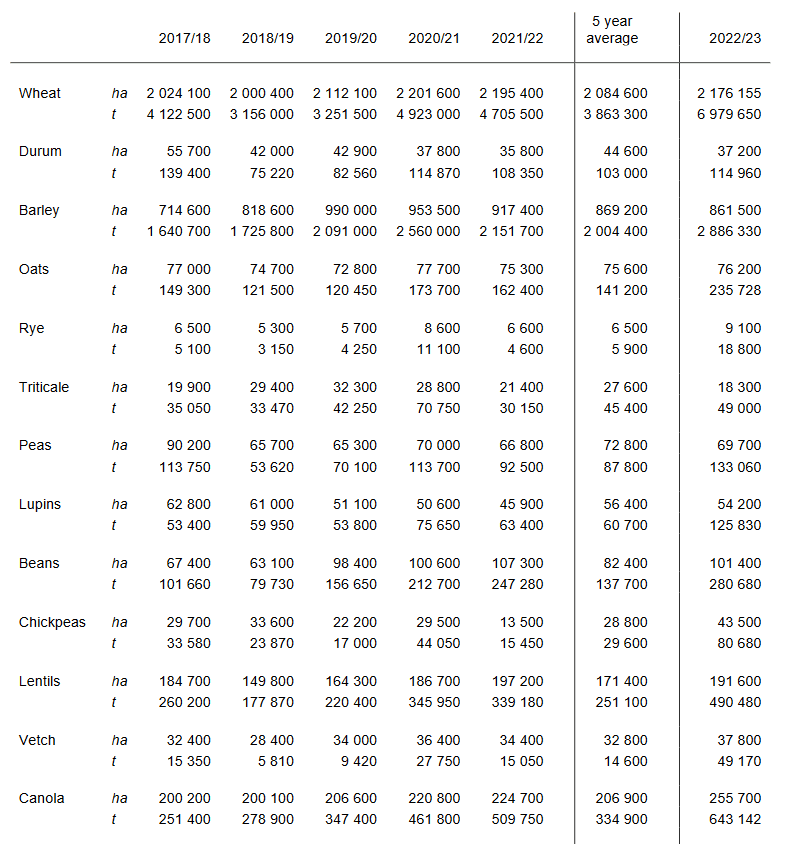