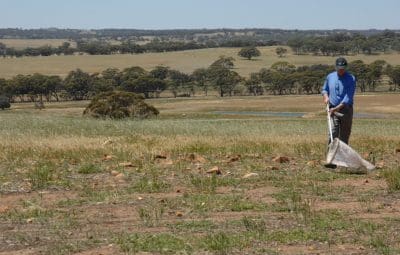 Broadacre farmers are encouraged to monitor pastures and crops for Australian plague locusts, report observations to DPIRD and treat as necessary. Image: DPIRD

WA broadacre property owners have been encouraged to monitor pastures and crops for signs of Australian plague locust (APL) activity, with reports of hatchings and movement activity from the Central Agricultural Area.

Protracted rainfall and mild spring conditions have combined to delay hatchings in some areas of the Grainbelt.

The Department of Primary Industries and Regional Development’s (DPIRD) PestFax newsletter has received reports of APL activity from Perenjori, Coorow and Eneabba, through to Wialki and Coomberdale, east to Beacon, Southern Cross and Burracoppin.

DPIRD research scientist Svetlana Micić said while many crops are haying off and will not be at risk to locusts, later sown crops and green pastures could still be vulnerable – especially if there is further rainfall.

“Crops that are beginning to dry off when locusts begin to fly are especially susceptible to damage,

“Recent rainfall, combined with mild weather is expected to increase the availability of green feed, particularly along roadside verges and paddock edges, which could provide sufficient food reserves for locusts to reach the next growth stage.” 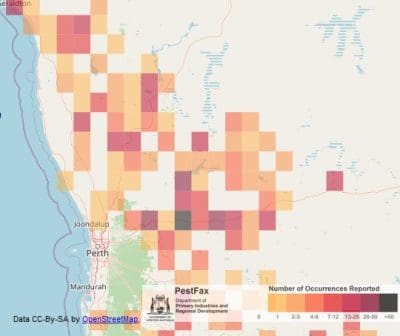 Interactive PestFax map. Source: Government of WA in OpenStreetMap. Access the web page by clicking on the Map link at the foot of the story.

There have been limited reports of APL activity from other areas of the Grainbelt, although Ms Micić said if wet and mild conditions persisted, locusts could be an issue for landholders further south.

Ms Micić said it was important for landholders to monitor hopper and adult locust numbers and to undertake control measures, if necessary.

“Locusts hatch at variable times so it is important for growers to monitor crops and pastures that are still green to determine if and when to spray,

“Most activity would be expected in pastures so look for early hatchings and hatching egg beds in bare patches, such as around dam banks, road catchments and along fencelines.”

The department recommends treating pastures, if the cost of controlling locusts exceeds the cost of replacing feed.

Ms Micić said once locusts were on the wing, they could be difficult to control.

“The threshold for treating pastures is 20 hoppers per square metre or 10 adult APL/m2,

“To achieve effective control, the best time to apply an insecticide is when locusts are at the hopper stage, ideally at the third to fourth instar growth stage, when they are one to one and a half centimetres long.

“Landholders who observed APL on their properties in autumn need to be particularly vigilant, as there are likely to be egg beds that have hatched.”

Landholders are reminded to comply with label regulations when treating pastures and crops, particularly the withholding periods.

While it is up to landholders to control locusts on their properties, DPIRD will continue to monitor APL over spring and summer and provide advice on treatment measures.

More information is available in the latest edition of the PestFax newsletter and on the Season 2021 webpages.