SOYBEANS grown in north Queensland are playing a crucial part in supplying domestic processors who are scrambling for product due to drought in New South Wales and southern Queensland. 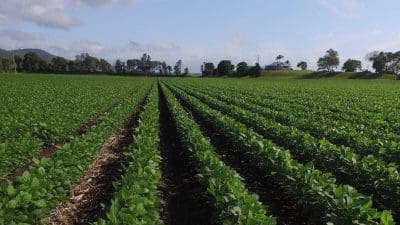 A soybean crop on the Causley farm in the Clarence Valley of northern NSW. Photo: Shane Causley

Soy Australia and the peak Australian Oilseeds Federation (AOF) body have estimated the crop harvested in 2019 to be less than one-third its normal size, with drought this and last year behind the drop.

The organisations say drought has impacted not only farmers, but also manufacturers of soymilk, tofu, soy flour and tempeh, who have been competing fiercely to secure a share of the small 2019 crop, and supply the $25 million soybean industry.

Tempering the impact of drought is increased production from tropical Queensland, where growers and their processor partners are gearing up to produce their second commercial crop of winter-grown soybeans.

These are expected to enter the market by year-end.

“By utilising the available moisture and warmer temperatures in this region, we can grow what would normally be a summer crop during the winter months,” says northern New South Wales soy grower and Soy Australia chair Shane Causley.

“This will go some way to relieving the supply pressures until the next summer crop comes off in May next year.”

Australian food and beverage producers competing for the scarce 2019 crop have driven up soybean prices, and this has made the crop more attractive to growers.

The tight supplies have also meant some processors have had to go offshore in order to keep supplying the Australian market.

“It’s always unfortunate when we have to import products which we can normally supply locally, but this is an unprecedented time and it’s absolutely imperative that Australian soy food and drink manufacturers stay open for business and keep their brands on supermarket shelves,” AOF CEO Nick Goddard said.

“Inevitably, importing costs more, is more complex, has longer lead-times and requires more on-site storage, but this is the short-term reality the industry is facing,” Mr Goddard said.

“Australian soybeans hold a unique position in the market as they are non-GM, grown through both organic and conventional farming practices, and specifically suited for use in food and drink processing.

“This is a market position we want to protect, so there is a lot of effort throughout the supply-chain to ensure we can retain this position.”

Research and development are playing an important part in making soybeans an attractive addition in sugarcane and other cropping rotations.

New varieties, as well as the funding agreement announced this month by the Cooperative Research Centre for Developing Northern Australia (CRCNA) and the Grains Research and Development Corporation (GRDC), point to a growing importance for soybeans in northern Australia.

“This will assure solid supply of Australian grown soybeans for the domestic soy-based food and beverage industry.”

In recent years, soybean production has varied greatly, with AOF figures saying the current year has yielded a recent low of 20,000 tonnes.

Australia’s soybean shortage has come at a time when the rest of the world is awash with soybeans.

The United States is the largest global soybean producer, and the current US-China trade dispute has soybeans as one of the key products involved, leaving US farmers and traders with large stockpiles of beans.

Mr Goddard said these soybeans were largely unsuitable for Australian food-processing needs, and could not help Australia out of its current short-term squeeze.