HOPES for average yields for much of the sorghum crop planted in Queensland and northern NSW hinge on rain in the next two weeks to even out already patchy conditions. 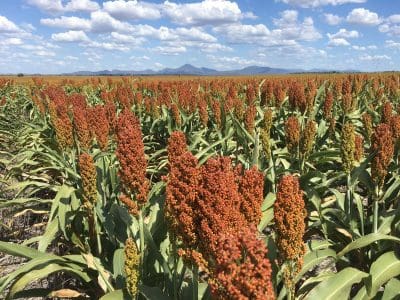 In southern Queensland and northern NSW, much of the crop was planted on time in October following general rain, while in Central Queensland (CQ), most growers are waiting on rain to plant their crop in the ideal early January to mid-February planting window.

Crops across all growing regions have been planted into variable levels of subsoil moisture, and agronomists have said crops established on long fallow have a much higher yield potential than those planted into a winter fallow.

All crops are said to be in need of a drink as growing regions brace themselves for a week which is forecast to bring successive days of temperatures close to 40 degrees Celsius, and little to no rain.

At Emerald, AgNVet Agribusiness’ Simon Mulder said only a portion of CQ’s intended sorghum area had been planted.

“A little bit’s gone in, but we want some rain in the next few weeks because the planting window for areas near Emerald closes around mid February,” Mr Mulder said.

However, northern parts of CQ’s Central Highlands will plant into late February and beyond.

“We need a lot of rain. We got that Cyclone Debbie rain at the end of March, then some rain in October, and we haven’t had much else at all.”

Dalby Rural Supplies senior agronomist, John Fuelling, said some southern Queensland crops have been helped considerably by scattered storms which delivered rain in the last week of December, while others were all but destroyed by hail in the same period.

“Anyone that got under storm rain has crops that are looking fantastic, but those storms were very patchy,” Mr Fuelling said.

Mr Fuelling said some sorghum has been planted on the Darling Downs in the past 10 days as part of the region’s late crop, but it was a much smaller area than the October-planted crop.

“The late crop has gone into standing stubble with reasonable subsoil moisture, and that should do well, but it’s more mungbeans than sorghum that have gone in this month.”

Mr Fuelling said a lack of rain plus some hot days in recent weeks has meant many Darling Downs sorghum crops were unlikely to achieve average yields.

Moree-based AMPS agronomist, Tony Lockrey, described sorghum planted on the northwest slopes and plains of NSW as being “in reasonably good shape”.

“It’s flowered, and is filling grain and starting to colour, but rain now would fill more grain on tillers.

“Boxing Day was the last proper rain we had.”

“It’s a bigger sorghum crop than in the past two summers, but I still wouldn’t say it was up to an average crop; it’s maybe 75 per cent of what we normally grow.”

Mr Lockrey said crops which were planted into full soil moisture profiles on or near slopes country in districts like Bellata could be expected to yield 3.5-4t/ha, while crops on the plains to the west of the Newell Highway were likely to yield 2-2.5t/ha, up on their average of 2t/ha.

“Anything on short fallow, as in back-to-back sorghum, is struggling, and everything’s looking for a drink now,” Mr Urquhart said.

He has estimated the better crops have a yield potential of 6.5t/ha, but they needed rain in coming weeks to consolidate their prospects.

“A lot of crops are coming out in head, and some early crops are starting to colour up, but some crops on the short fallow are struggling to push a head out.”

Mr Urquhart estimates a roughly 50/50 split between the region’s crops on long and short fallow,

“We haven’t had much rain to help things since planting. It’s been mostly falls of 10-15 millimetres, but some got up to 25-40mm last week which has helped things along.

“We’ve got four 40-degree days coming, so it remains to be seen how long the crop can hold its condition without rain.”