FIVE decades of breeding for yield in Australian wheat has given researchers from The University of Western Australia (UWA) interesting insights into root systems, and how efficiently they take up nitrogen and water from the soil. 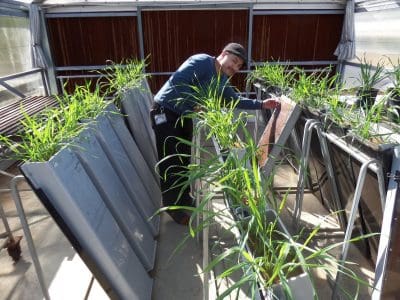 Improvements in grain yield are associated with higher nitrogen uptake, and thanks to research supported by the Australian Centre for International Agricultural Research (ACIAR), we now know the mechanism of how this is achieved.

Given the worldwide effort to improve nutrient-use efficiency of crops, the findings, published in the prestigious journal Plant and Soil, will have a big impact on global breeding programs to develop climate-ready crops for the future.

Dr Moyassar Aziz, from Mosul University in Northern Iraq studied the root systems of selected wheat varieties released in Australia between 1958 and 2007, whilst visiting The UWA Institute of Agriculture.

He found that the reason modern wheat varieties increased their nitrogen uptake was not associated with increased root length density as was previously thought, but due to increased efficiency by which nitrogen is captured.

UWA adjunct professor Jairo Palta who co-supervised the research, said understanding the efficiency of the root system is especially important for the Western Australian grain belt, where water and nutrient content of soils are limited.

“The results are exciting because they show that breeding for yield has resulted in a cleverer root system,” Professor Palta said.

“The wheat varieties used in this study are an interesting subset to further investigate the physiology of nitrogen uptake and its genetic basis.”

He conducted an intensive field study at Merredin, in the Western Australia grain belt, to test the root redundancy hypothesis, and published the findings in Plant and Soil in 1990.

“Greater understanding of root system architecture for future yield and quality improvements is a high priority.”

The paper, ‘Five decades of selection for yield reduced root length density and increased nitrogen uptake per unit root length in Australian wheat varieties’, was published in Plant and Soil and supported by the Australian Centre for International Agricultural Research (ACIAR) in collaboration with the South Australian Research and Development Institute (SARDI).