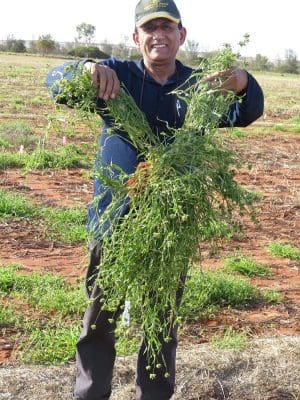 A  roadside survey in 2015 and 2016 has found the threat to grains crops from emerging weed species is increasing throughout the WA grainbelt.

The survey was conducted byDepartment of Agriculture and Food (DAFWA) as part of Integrated Weed Management (IWM) research jointly funded with the GRDC.

WA growers are being urged to employ robust IWM strategies to protect crop yields and profit.

Dr Hashem said summer and winter weeds were being found in larger populations than previous years.

“New species found on the roadsides include sowthistle, button grass and tar vine with 26pc, 10pc and 7pc frequency.”

He said other research projects in the eastern states showed some of the same emerging weed species as in WA had also become increasingly resistant to a number of herbicides, including glyphosate.

“Our work, involving research officers Mohammad Amjad and Catherine Borger, seeks to better understand the biology and ecology of these weeds to improve farm management strategies to minimise the risk of these and other emerging weeds,” he said.

Dr Hashem encouraged grain growers to explore a range of IWM strategies, to control emerging weeds and to minimise the risk of herbicide resistance.

With rising incidences of glyphosate resistance, he urged growers with at risk crops to consider a double knockdown to achieve successful weed control and minimise the risk of herbicide resistance development.

“If not controlled, the winter weed species compete with crops for soil nutrients and soil moisture, while in summer they remove soil moisture and nutrients,” he said.

“It is most important to prevent seed-set of summer and winter weed species to reduce the risk of enriching the weed seed bank in the soil.” 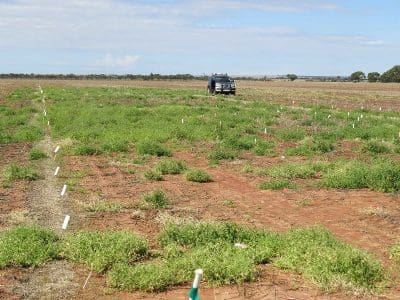 A DAFWA trial on the control of button grass, an emerging summer weed, is underway during summer season of 2015 at Mullewa.

“Trials investigating IWM of wild radish at Dalwallinu in 2014 to 2016 in a wheat-wheat-wheat sequence showed a combination of knockdowns, effective in crop herbicides and sowing with a high seed rate achieved excellent control of this weed in just three years,” Dr Hashem said.

“Some weed species secrete toxic chemicals into the soil, a process known as allelopathy. The direct and indirect effects of these summer weeds can reduce crop emergence and subsequent grain yields.

“One key strategy is to get rid of summer weeds and the risk of a ‘green bridge’, which can also carryover crop diseases and pests to the winter crop.”

Trials conducted at Geraldton, Jennacubbine, Mullewa, Merredin, Nungarin, Wickepin and Wubin in 2014/15 and 2015/16 summer seasons showed a mixture of 2, 4-D plus glyphosate or 2,4-D and glufosinate, followed by a paraquat-based mixture controlled 94 to 100 per cent of button grass, fleabane, sowthistle or tar vine.

Future IWM research, co-funded with the GRDC, will improve understanding of seed biology, ecology and persistence of an additional 14 weed species, to keep ahead of weed threats that continue to emerge in response to farming system and seasonal changes.

For more information about the department’s IWM research activities visit agric.wa.gov.au and search for ‘IWM’.

A number of IWM options to control emerging winter and summer weed species will be discussed as part of the Grains Research and Development Corporation’s (GRDC) Grains Research Update, Perth, February 27-28.

For more information on the Grains Research Updates go to the Grain Industry Association of WA website giwa.org.au/2017researchupdates