Science and ‘people power’ the key to agriculture’s success

SCIENCE will play a key role when it comes to feeding the world and achieving agricultural targets like $100 billion in Australian farm gate outputs by 2030, according to Toowoomba-based researcher Kristen Knight. 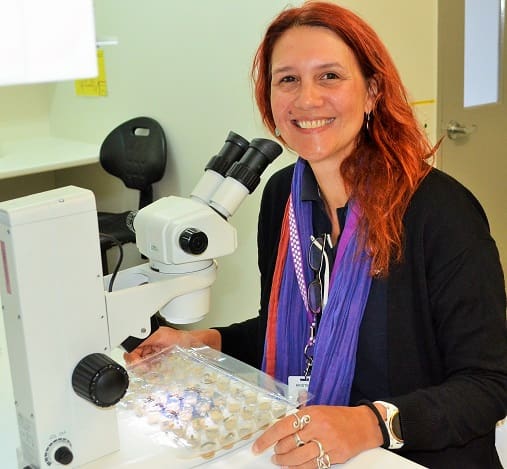 But the entomologist, who also has a degree in psychology, knows what happens under microscopes in laboratories isn’t the only thing that is critical to the agriculture’s growth: the sector needs people.

Dr Knight has been a leading researcher in Monsanto’s Toowoomba-based Research Centre for the past 12 years. With Monsanto being acquired by the German company Bayer this month, she has shared her thoughts on what the future holds for Queensland, Australian and global agriculture and who and what will influence ag’s success into the future.

“Discussion papers, like the National Farmers Federation’s Talking 2030, have kicked off an important conversation about what’s next in terms of setting goals for agriculture that will make sure we meet world demand for food and fibre,” she said.

The Talking 2030 discussion paper, supported by NFF and Telstra and prepared by KPMG, is firmly focused on bringing bold, innovative ideas from farming, agribusiness and industry experts to meet the goal of $100 billion in Australian farm-gate outputs by 2030.

The figure translates to growth of almost 70 per cent in the next 12 years.

Dr Knight, who is currently in the US for discussions on future technologies that might apply to the Australian cotton industry, said it was a lofty, but achievable target.

She believes the merger of the two multinationals will have benefits for Australian farmers in terms of greater collaboration and investment for science research and translation to on farm.

“But meeting the world’s future demand for food and fibre is going to take all the collective might of Australian and international scientists and farmers,” she said.

“I believe the key to success will be working together, across agricultural industries and geographies, sharing knowledge and developments and encouraging the next generation of researchers and farmers to get involved and embrace innovation.”

Dr Knight said people power would be a critical part of the equation as science and agriculture worked together to feed the world.

“It could be my background in psychology but I am a staunch believer in the importance of bringing both the next generation and urban people along for the journey as well,” she said.

“I want people to get excited about science and how it can change the world. We have finite resources so to meet growing global demand we have to work out how to do more, with what we have.”

Dr Knight knows firsthand the power of people when it comes to scientific discoveries. Her Toowoomba colleagues consist of just five lab and field technicians, along with a ‘gap year’ intern and she believes a team approach ensures they understand and appreciate the value of work they are doing for both Australian cotton growers and farmers globally.

“About a decade ago we initiated a program in the Toowoomba lab that involved bringing on a young person, to work with us in the lab while they were on their gap year. It’s proved an invaluable initiative in terms of connecting with young-would-be scientists, nurturing talent and encouraging community interest in what we do,” Dr Knight said.

“We also regularly run tours for primary and secondary school students from Toowoomba and Brisbane, as part of our commitment to getting the next generation excited about science.”

Closer to home, she said seeing their research increasing farm productivity and changing farming practices for the better was a major motivation for her Toowoomba-based colleagues.

Her team has played an instrumental role in helping to develop the widely renowned Bollgard technology – cotton plants that produce their own insecticide and are resistant to the main pests that feed on and destroy cotton.

The development of this genetically modified cotton has had significant implications for the environment with its resistance to the cotton pest – bollworm – meaning growers are now spraying their cotton up to 10-12 times less a season. This means a huge decline in the amount of pesticide used, as well as tractor hours, which equates to a decrease in carbon emissions from the industry.

“We work closely with Monsanto’s research farm near Narrabri in northern New South Wales and while our research has significant relevance to Australian cotton growers, we are also part of a global team testing technologies for huge markets like the United States,” she said.

“We can do this successfully from a lab in regional Queensland because we have talented people and the right equipment to do work that has relevance to the global ag industry. The work we do here in Toowoomba impacts what growers are doing in cotton paddocks at Goondiwindi as well as in Texas in the US.”

She said Monsanto had also been able to use the Toowoomba lab for global research work due to Australia’s commitment to scientific processes.

“Australia has very robust biosecurity and quarantine regulations that allow us to bring material in from the US and other places to work on, then export back to the market in which it will be commercialised,” Dr Knight said.

“These types of protocols and processes really show the Australian government’s support for innovation in science and this will contribute significantly to making new discoveries that will help farmers across the world feed and clothe the growing population.”