WITH a hybrid crop called Salish Blue, scientists at Washington State University (WSU) have combined wheat and wheatgrass in a new species with the potential to help America’s Pacific Northwest farmers and the environment. 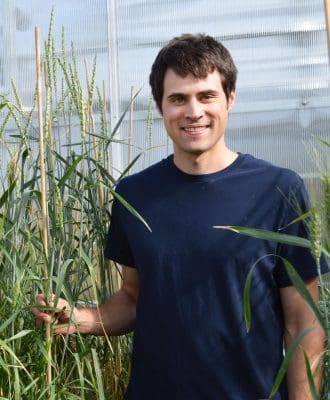 Salish Blue is just one variety of a new perennial grain species, ×Tritipyrum aaseae. It’s the first new species to be named by wheat breeders at WSU in 122 years of breeding.

Unlike bread wheat, which is planted and dies in a single generation, perennial grains hold the promise of bearing seed for multiple harvests.

At the same time, perennial hybrids can bring ecological benefits to grain production.

“Perennial grains add value in ways other than just being wheat,” said Colin Curwen-McAdams, a graduate research assistant at the WSU Bread Lab at Mount Vernon.

“What we need right now are crops that hold the soil, add organic matter and use moisture and nutrients more efficiently. That’s the goal of this breeding program.”

Breeding Salish Blue, which was developed as a potential food and dairy forage crop for the Pacific Northwest, gives farmers new options.

“We’re working with farmers to determine what Salish Blue will do and how it will fit with their rotations,” said Stephen Jones, wheat breeder and director of the WSU Bread Lab.

For the past century, breeders around the world have been trying to develop a perennial grain crop from wheat and its wild relatives.

“It’s incredibly difficult to get what qualities you want, and hold on to them over generations, while not bringing along other things that aren’t desirable,” Mr Jones said.

The new species is named after professor Hannah Aase, who explored wheat genetics as a botanist and cell biologist at Washington State College, now WSU, from 1914 to 1949. She died in 1980.

“The work Dr Aase did was important but largely overlooked,” Mr Curwen-McAdams said.

“She was trying to answer the question of where wheat comes from. We wanted to honour her and bring her back to the forefront.”

Mr Curwen-McAdams and Mr Jones describe development of the species in a recent issue of Genetic Resources and Crop Evolution http://link.springer.com/article/10.1007/s10722-016-0463-3

In their paper, they call for breeders and geneticists to contribute to nomenclature – how species are named – to advance the science of grain hybrids.

“We wanted to lay out a strategy for naming these combinations, and then name one ourselves to show how it’s done,” Mr Curwen-McAdams said.

“It’s no longer wheat or a wild species. Naming this as a new species lets us think about how it fits into our agriculture.”