THE development of new sesame varieties with higher levels of resistance to shattering could prompt the re-emergence of the sesame-growing industry in Australia’s summer cropping regions.

Speaking at the 2019 Summer Grains Conference, PBAgrifood field officer Ben McIntyre said while sesame had been grown in the past, farmers had been deterred because the original varieties weren’t shatter resistant, leading to significant grain loss before and at harvest.

Mr McIntyre said the development of new varieties that were much more shatter resistant and could withstand weathering meant timeliness of harvest was now not as critical as it used to be.

He said sesame was a 120-140-day crop with potential to slot into cropping programs because it could be planted in December, a time when few other crops could be sown without potential risk at flowering time.

“It fits that window. It needs heat units to continue to flower. The longer it is able to flower the better the yield will be,” he said.

Mr McIntyre said they were still working out where the small-seeded crop ideally could be grown. 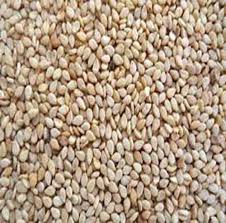 “It needs a full profile of moisture because it is very deep rooted. It is hardy. Even with limited rainfall it will still produce some sort of yield.”

Mr McIntyre said it was early days yet and there was still a lot to learn about where sesame would fit in the domestic and export markets.

He said the critical thing for Australia was to focus on producing grain of exceptional quality.

“The biggest challenge is getting it to the quality that is going to fit into the high-quality food market around the world,” he said.

“It is a food-grade product and the standards are quite high. It is a small seed so it is not easily graded and separated from contaminants. We have to see what standard it gets to and where it fits in the export trade,” he said.

Mr McIntyre said with the vast majority of the world’s sesame crops harvested by hand under rudimentary conditions, Australia’s capacity to harvest and handle it under modern, controlled conditions gave it a marketing edge.

“One of the reasons people are interested in coming to Australia to buy Australian sesame is the clean, green image,” he said.

“The Europeans are including more and more sesame into their diet. One of the things they are worried about is salmonella and aflatoxin.

“We have had inquiries from China, Vietnam, Japan wanting to come and buy Australian sesame.”

Mr McIntyre said producers considering growing sesame needed to understand its specific management requirements. It was not a crop for everyone.

“It is going to be a crop that needs stewardship and growers who are prepared to learn how to grow it. There are growers who have grown the old varieties who are quite interested in growing sesame again because they understand the vagaries of it. They are the people who will be taking it up first,” he said.

Conversely, it was very sensitive to cold temperatures.

Mr Gar said sesame was low maintenance with few diseases or pests that affected it.

“It is small seeded but you can use any kind of planter, especially if it is suited to canola which has a similar seed size. The main challenge for sesame is to get it out of the ground.”