A HIGH-TECH grains project is getting closer to developing more efficient and effective mechanisms to measure gravel soil properties, which will assist growers to optimise fertiliser and lime inputs and boost crop potential. 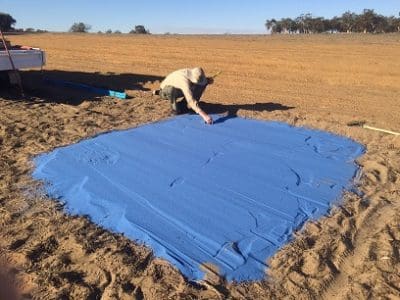 DPIRD officer Richard Bowles spreads coloured sand, before the soil is cultivated with a rotary spader, to measure mixing of the soil by inversion tillage as part of a Grains Flagship project to improve gravel soils management.

The WA Department of Primary Industries and Regional Development is collaborating with the University of Western Australia on a Grains Research Flagship project, to develop methods for rapid assessment of gravel soils.

Department research officer Craig Scanlan said the first of the project’s three components had been completed, to develop an infield method of measuring bulk density, the weight-to-volume ratio, of a soil sample.

Bulk density is a key indicator of soil fertility and compaction in gravel soils.

Dr Scanlan said the new mechanism took about one-third of the time to calculate soil bulk density and was more accurate.

“We have used a 3D camera to scan a soil sampling hole, which is linked to computer software that evaluates the volume of the hole to provide a measurement of the bulk density,” Dr Scanlan said.

“It takes just 30 seconds to scan a sample hole and, depending on the soil type, about five minutes to complete the process of digging the hole, scanning and processing the scanned image.

“The device will be a useful research tool and of interest to soil sampling companies and growers seeking to overcome soil compaction and address soil fertility constraints.”

A 3D camera is also being used in a second component of the project, to measure and classify the type of gravel in a soil sample.

“The aim is to develop a laboratory technique using a 3D camera to pick out gravel stones from a soil sample and measure their size and distribution,” Dr Scanlan said.

“The results will be married with a predictive model to determine the mineralogy of the sample, based on the stones’ colour, shape and surface roughness.

“We are about two-thirds the way through this research, which should make gravel soil classification cheaper and quicker without a loss of accuracy.”

Work has also progressed on the third component of the project, to produce a 3D digital image of a soil profile after it has been inverted by tillage.

Dr Scanlan said the measuring device could provide an accurate measurement and visual demonstration of the soil profile, which had not been possible before.

“We pushed a 600 millimetre square steel box into the ground after tillage and used the 3D camera to capture an image of the soil layers as we excavated them, centimetre by centimetre, to a depth of about 40 centimetres,” he said.

“UWA post doctoral research fellow Dr Hossein Rahmani is developing a computer program to segment the coloured soil applied to the inverted soil sample to provide an insight into the vertical and horizontal redistribution of the soils after inversion tillage.

“The result will be a highly accurate 3D model of the soil profile in just a few hours, compared with a process that previously would have taken much longer to complete.

“This information will enable researchers, growers and consultants to better understand the soil inversion process and its influence on soil water repellence, herbicide-resistant weeds and the incorporation of inputs, such as lime.”

The research is one of a suite of Flagship projects to address Western Australian production constraints, part of the department’s Boosting Grains Research and Development initiative made possible by Royalties for Regions.