Southern growers sign off on a winter crop harvest to remember

THE eastern seaboard winter crop harvest is drawing to a close with harvesters stripping exceptional yields from the last of the crops to come off in south-west Victoria and south-east South Australia. 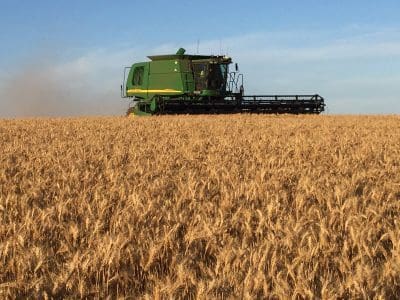 The eastern winter crop harvest is all but done and dusted with harvesters only days away from taking off the last of the crops in the far south.

Growers in the far south have shared in the big yields of this season’s harvest which has seen record tonnages delivered to many Graincorp silos throughout Queensland, NSW and Victoria.

By mid-January, GrainCorp had taken in 12 million tonnes across its eastern receival centres, the biggest winter harvest since 2010/2011 when the network had received 12.3Mt by the same time.

In south-west Victoria, Dagro agronomist at Tatyoon, Craig Drum, said harvest was 70-80 per cent completed and would only need a few days to finish once the current run of cool, damp weather eased.

“The problem is there has been some light rain and the southerly has come in and they are only talking 21 degrees today,” he said.

Mr Drum said it had been an exceptional year for wheat production in the area.

“I heard of one farmer who stripped 1050t off 100 sown hectares, so just over 10t/ha. That’s as high as I’ve heard. A lot of guys are averaging over all their wheat anything between 6.5 and 7.5t/ha which is phenomenal,” he said.

With canola, he said it had been a “tale of two stories” this season with some exceptional crops, and others adversely affected by wet conditions.

“Any well-drained country has produced the best canola crops people have ever grown. In the case of some growers, that is their best canola by a significant margin in terms of yield,” he said.

“But any country that is heavy or low-lying or not well drained became wet and has been very disappointing. Most guys are having a very good year, but it is moreso just the odd paddock or part of a paddock that hasn’t done well.”

Canola yields have averaged between 3.0 and 3.5 t/ha, while there have been some crops that have gone 4.5 to 4.8t/ha, all with high oil content.

Mr Drum said milling oats had “really taken off in this part of the world” again with farmers encouraged by prices of up to $300/t over the last three or four years.

However, while growers didn’t increase the area sown to oats this season, the crops yielded 6.0 to 7.0t/ha – significantly more than past seasons – and the price has now fallen back to around $100/t.

He said there had also been a substantial area of oats grown for hay this year to service the nearby dairy market.

“Most oaten hay paddocks have yielded 11 to 12t/ha with a few around 15t/ha. That is nearly corn and silage levels. The quality is not great but the yield has been unbelievable,” he said.

Mr Drum said faba bean crops, which had only become popular in the region in the last year, had yielded very well and exceeded expectations.