THE future of soil moisture measurement could rely on cosmic forces if space-age soil probe technology currently being tested and assessed in the field by Australian scientists becomes more widely available.

The CSIRO manages a national network of about 14 CosmOz neutron soil moisture monitoring probes that use cosmic rays from outer space to measure average soil moisture over about 30 hectares. 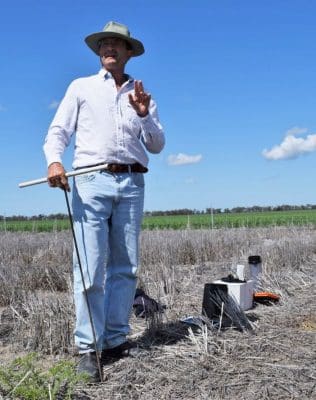 David Freebairn says CosmOz technology is the new generation in soil moisture measurement, but there is still a place for the traditional, manual moisture probe.

Key to how the system works is the steady shower of cosmic rays that bombard the earth and interact with the atmosphere and top layers of the soil.

By measuring the fast neutrons that are produced by the interaction and are moderated by water molecules in the soil, the technology can calculate soil moisture levels. The fewer the neutrons, the wetter the soil.

Speaking at one of the CosmOz sites near Mungindi in southern Queensland this week, University of Southern Queensland soil scientist David Freebairn said the beauty of the technology was it sampled a large, 300 square metre radius circle.

“That gets rid of all the ripples and little errors we get from normal soil sampling. That’s a strong advantage,” he said.

“A disadvantage is it doesn’t sample very deep. So if the soil is very wet it will sample to maybe only 10 centimetres, but if it is dry it can go to 30cm. That is all well understood.

“So from my perspective, understanding the movement of water in the top 30cm reliably for a big area is a brand new source of data that might give us some insights we haven’t been able to get from other data.

“It is like any research, you are not sure what it is going to tell you until you have made a few mistakes and stumbled across something. It is a technology looking for a task.

“But as a soil physicist, I think it could be very valuable in improving our confidence in how we model soil water.”

Dr Freebairn said while CosmOz was currently used primarily as a research tool, he saw a time when it could possibly become more widely available in the farming community.

“I see it as a research tool, but who knows. They cost about $30,000 each now, but if they became $3000, which is quite feasible, they might become widely used in farming,” he said.

The CSIRO’s national CosmOz network covers about 14 sites. It is part of an international network.

Data are logged and transmitted every 60 minutes to the CosmOz database. That data are freely available for use (cosmoz.csiro.au)

Meanwhile, there is a wide array of established soil moisture measurement technologies that farmers currently use.

The USQ and GRDC have just released a new app, SoilWaterApp (www.soilwaterapp.net.au) which is available free. It needs an IOS device – an Apple iPhone or iPad. It is not Android.

Dr Freebairn said there was still a place for the rudimentary, manual soil moisture probe.

“It is tactile which farmers like. But it has its limitations. It requires walking the paddock, which is not a bad thing. It is a good tool for ground-truthing other data.”