BARLEY crops in some high and medium rainfall areas of Western Australia may be exposed to damaging levels of spot form of net blotch (SFNB) this winter, but new research shows risks can be reduced with tactical fungicide use. 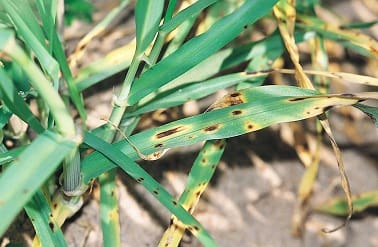 Crops most likely to suffer from spot form of net blotch are barley planted consecutively after barley on high stubble loads and/or if there have been wet conditions after plant emergence. (Photo: Hugh Wallwork)

Crops most likely to suffer from this common disease, caused by the fungus Pyrenophora teres f. maculata, are barley planted consecutively after barley on high stubble loads and/or if there have been wet conditions after plant emergence.

Production losses can be as much as 30-40 per cent, and there is potential for high screenings at harvest.

Signs to look out for in the paddock include small, solid brown oval lesions on leaves, surrounded by yellow edges. As infections progress, these may elongate and join – causing blotch symptoms.

Research carried out in WA with Grains Research and Development Corporation (GRDC) investment highlights the value of carefully planning the number and timing of fungicide applications to match seasonal conditions, in order to optimise SFNB control and economic returns.

Conducted by ConsultAg and the Department of Primary Industries and Regional Development (DPIRD) in 2015-17, the project ‘Best practice management of SFNB in barley and interaction with stubble management and head loss’ found a potentially expensive fungicide strategy risked providing only marginal returns when early seasonal conditions were dry.

It also showed that when there is a dry start to the season and a slow build-up of disease, stubble management had only a minor impact on SFNB levels.

“If you see disease in the paddock in the next few weeks in these areas, a spray at Zadoks Growth Scale Z31-Z32 can reduce disease pressure and protect the canopy until a second application at Flag-1 stage,” he said.

Mr Butcher said growers in low rainfall areas could typically get away with one spray application around the Flag-1 stage when growing barley-on-barley crops, as this would protect the top three leaves in the canopy.

But he said decision making was more difficult in medium rainfall zones, where fungicide use needed to be more tactical to make economic sense.

“The cost of a single fungicide treatment can be about $10 per hectare, including application, and two-spray strategies can cost up to $30/ha,” he said.

“Our 2017 trials in medium rainfall zones found all fungicide treatments significantly reduced disease severity, compared with the untreated control, and boosted yields by about 10 per cent (175 kilograms/ha) when a double spray strategy was used at Z31 and Z37.

“This led to a marginal economic response of about $20-40/ha under high disease pressure (retained stubble) in a low rainfall year.

“The second-best treatment to lower disease levels was a single late application at Z37. A single early application at Z31 did reduce leaf infection by about half compared with the untreated control, but disease was able to re-enter the canopy later in the season.”

The GRDC and Curtin University-supported Centre for Crop and Disease Management (CCDM) says this year’s discovery of fungicide resistance in the pathogen responsible for SFNB in WA highlights the need for integrated disease control strategies to be used right across the State.

“For growers with DMI resistance or other suspected resistance in their paddocks, it is best to avoid doing two consecutive applications of the same Group 3 fungicide active (either as a foliar or seed dressing) in one season, unless these are used in mixture with a different mode of action (MOA),” he said.

“It is advised to always use fungicide mixtures with different MOA, adhering to label recommendations; to alternate fungicides where possible; and to never apply the same fungicide or MOA consecutively.”

If growers suspect that fungicides have reduced efficacy in their crops, they can contact the CCDM’s Fungicide Resistance Group at [email protected].