AUSTRALIAN researchers have embarked on a mission to better understand the role of weeds and volunteer cereals – known as the green bridge – in promoting the survival and spread of the nation’s newest broadacre crop pest, Russian wheat aphid (RWA). 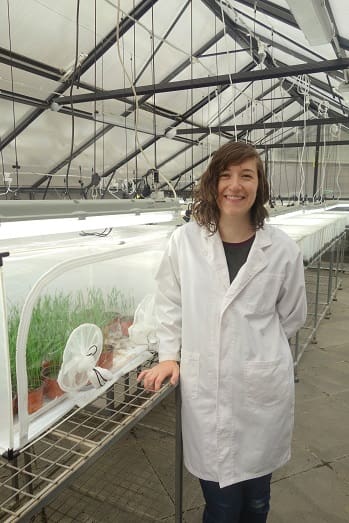 Recently it has been detected as far north as Coonabarabran and the Liverpool Plains in NSW.

RWA has not been detected in Western Australia, the Northern Territory and Queensland.

However, grain growers in southern Queensland are being advised to monitor for the pest and report sightings.

“I am advising my clients to check crops, and importantly verges where green bridge might be a host to RWA so that we get a picture of what the host risks are and what can be done to manage the pest to reduce impact, particularly ahead of winter planting,” Mr McKenzie said.

“I am also recommending growers consult with their advisers regarding insecticide use for grain seed management, as well as in crop.”

The expansion of the area impacted by RWA has prompted a new Grains Research and Development Corporation (GRDC) investment, with scientists conducting active field research at more than 100 surveillance sites throughout SA, Victoria, Tasmania and NSW this summer to investigate how RWA survives between winter cropping seasons.

This knowledge is considered pivotal in determining the risk of infestation and potential damage ahead of each new cropping season, as well as aiding RWA management planning and development of cultural controls.

Apart from understanding what role the green bridge plays in supporting RWA populations over the summer, the two-year GRDC RWA research investment is also seeking to determine the regional production risk posed by RWA and the economic thresholds that will guide growers in effective management of RWA, taking into account growing regions, crop varieties and climatic conditions.

The collaborative investment, “Determining regional risks and economic thresholds for Russian wheat aphid in Australia”, is being led by the South Australian Research and Development Institute (SARDI), a division of Primary Industries and Regions SA, which is conducting research in partnership with sustainable agriculture research organisation cesar.

Operation of the field trials also involves a number of farming systems groups.

Dr Pirtle said samples were being taken from paddocks, fence lines and road sides, and relevant information being recorded included crops and grass species present, whether there were irrigated paddocks or waterways nearby, site topography, RWA growth stage, and the presence or absence of parasitoid wasps and beneficial insects in the sample.

“At an irrigated site we visited recently, there was a lot of healthy-looking barley grass and the site was swarming with aphids,” Dr Pirtle said.

“But it was also swarming with beneficials – there was more lady bug larvae than I’ve ever seen in one spot and they were really going to town on the aphids.”

The work doesn’t stop there. At cesar’s Melbourne research facility, a risk forecasting tool is being developed to interpret the field data to help growers and their advisers plan RWA management strategies at the start of each season.

“We are creating interactive risk maps using real time data that predict the risk of RWA distribution and abundance into the next season. It’s a way of leveraging knowledge about the green bridge into useful tools that will help growers make crop protection decisions before, during, and after the season,” cesar’s James Maino said.

“You will be able to see broad differences between the States and can zoom in further to see what specific risk exists for a particular region, as well as see data generated by the project on absence and presence of RWA detected during our field work.”

In the meantime, growers are being encouraged to perform their own RWA surveillance over the coming months.

Weeds and volunteer cereals harbouring aphids may not necessarily show symptoms of infestation typically found in crops and populations are likely to be smaller at this time of the year, so Dr Pirtle advises growers to closely inspect grasses by unfurling leaves and checking inside partially emerged heads, paying particular attention to annual weedy barley grass.

Growers should also look for signs of predatory insect activity, such as mummified aphid bodies resulting from parasitic wasps laying eggs inside the aphid.

Data from this summer’s surveillance work by cesar will be combined with findings from research partner SARDI which has been replicating the green bridge study in SA, as well as conducting separate field trials in RWA-affected regions to measure yield loss on different host crops growing under a range of environmental conditions to develop regional economic thresholds.

The current project will culminate with an update of the GRDC RWA Tips & Tactics guide, which can be found at https://grdc.com.au/TT-RWA.

Further information on RWA management is contained in the Russian Wheat Aphid: Tactics for Future Control publication, available at https://grdc.com.au/rwa-tacticsfuturecontrol, as well as I SPY, a comprehensive crop insect identification manual, which can be viewed at https://grdc.com.au/I-SPY. A RWA resource portal hosted by cesar is available at http://bit.ly/2Px67tu.

Growers and advisers are encouraged to report occurrences of RWA to the GRDC’s PestFacts services (http://bit.ly/2O3hoBj for south-eastern, and http://bit.ly/2O35bMX for SA) and to take advantage of pest identification services provided by cesar and SARDI through the National Pest Information Service.

Suspected RWA detections in currently unaffected States should be reported to the Exotic Plant Pest Hotline on 1800 084 881.