THE Tasmanian farming sector is undergoing a transformation to reduce the state’s dependence on grain imports by adopting new cereal lines from the mainland and abroad to bolster local feed grain production. The move is aimed at giving growers an opportunity to meet rising demand from the livestock and aquaculture sectors and create an alternative production option to fill the gap from the diminishing poppy industry.

Underpinning the process has been the Hyper Yielding Cereals Project that has sought out potential lines of cereals from Australian and overseas breeding programs with traits particularly suited to the Tasmanian environment.

That project is beginning to bear fruit, with the selection and testing of a number of promising varieties, some of which are at the point of commercial release.

“There are huge opportunities, given that Tasmania is an island state and we can see what countries such as New Zealand are doing in terms of yields. Given a similar environment, we are looking at the opportunities to rapidly increase Tasmania’s total production to help reduce some of the mainland imports,” he said.

“The imports will continue because Tasmania doesn’t have the production in the short or medium term. It is a very long term view to think that Tasmania will be self-sufficient in grains.”

Mr Pengilley said the GRDC’s Hyper Yielding Cereals Project had searched the globe for the best cereal genetics for the feed grain market and had come up with some promising lines.

“We are not focused solely on quality like the rest of Australia is. In our environment, yield is king. Good growers are now getting cereal yields of 10-11 tonnes/hectare with irrigation. There are some very good dryland areas that are growing 6-7t/ha year-in, year-out,” he said.

“That is all with current genetics. So, we are doing a global search to see what other material is out there that we can helicopter straight in from Europe or New Zealand that would fit into our environment. 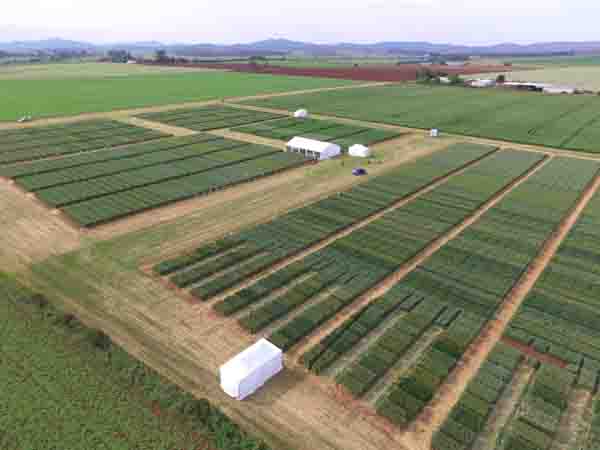 “As growers would appreciate, some of the varieties out of Europe have a much-superior disease package to what we have in Australia. Tasmania is a cool, long-season, high-yielding, high-biomass production area which is the hotspot of disease if it gets going. So, we really do need a robust disease package in our varieties.”

“We have also thrown down the challenge to Australian wheat breeders who might have material in their breeding lines that yields well, but may not cut the quality aspect that mainland growers are looking for,” he said.

Mr Pengilley said the second aspect of the project was to match the agronomy of Tasmania’s unique farming environment with the potential new lines.

The Hyper Yielding Cereals Project is led by the Foundation for Arable Research (FAR) Australia working in collaboration with Southern Farming Systems. The GRDC is the major investor.

FAR Australia managing director, Nick Poole, said the project was at the half-way stage, but had already selected a range of promising new lines, predominantly European-sourced varieties from France, England and Germany, and a couple of Australian-bred varieties. 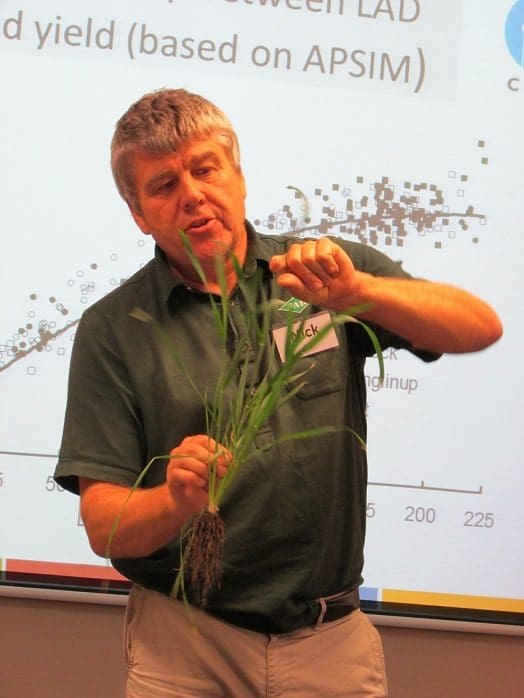 Mr Poole said some wheat varieties, such as the French line, RGT Accroc, had just become commercialised, while others were in the bulk up phase.

“There is a coded line from Dow Seeds. There are two other RGT lines that look particularly promising, one from France and one from the United Kingdom called RGT Relay. That is a very long season UK wheat that has performed strongly over the last two seasons. They are in the bulk up phase leading into the commercialisation phase,” he said.

“There are also barley varieties such as Rosalind from Intergrain which has been commercial for a couple of seasons now that we are working on to produce agronomy packages for in Tasmania. Another barley is RGT Planet.”

Mr Poole said the project was on track to meet its primary objectives:

“We are very used to talking about quality in terms of milling grade and export wheat, but not so much with feed wheat. So, one of the focal points of the project has been to reach out to end users of grain in Tasmania,” he said.

“The focus to date has mainly been on the poultry, dairy and feedlot end users. This year there will be a focus on aquaculture, convincing them the quality of Tasmanian wheat is good for their purposes, and also consistent enough for their purposes.”

Mr Pengilley said the introduction of improved feed grain lines would be a welcome addition to the complex range of crops Tasmanian farmers grew, especially at a time when the poppy industry was in the doldrums.

“Five years ago the poppy industry drove our rotations. We were focussed on poppies and everything else fitted in between that. Cereal grain crops were very much a poor cousin,” he said. 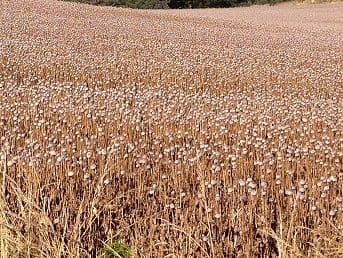 The poppy area in Tasmania has been declining.

“However, we have seen a decline in the poppy industry in both area and price. We have seen the poppy area drop back significantly.

“But now, with better agronomy and cereal varieties we have been able to focus more on grain production, rather than on poppy production that everything else fitted in behind.”

Mr Pengilley said a lot of growers were now of the view that if they could grow cereals that yielded 8-10t/ha “they are in the money”.

“They are focussing on their management. If they are going to do cereals, they want to do them properly and treat them as a stand-alone crop. That is essentially where growers are now,” he said.

“Cereals are no longer the poor cousin. They are one of the main crops in our system now.”

Mr Pengilley said the main production area was through the Midlands, but was expanding up towards the north west coast, especially with the State Government’s roll out of irrigation schemes, diverting water from hydro-electric power generation back to agriculture.