IN-PADDOCK temperature measurement could assist grain growers in determining whether their crops have been subjected to frost, therefore enabling them to quickly activate strategies to salvage a return from affected crops.

Temperature monitoring within a paddock in frost-prone areas is seen as an important tool, yet very few growers measure temperature at the susceptible parts of their property, according to Agrilink Agricultural Consultants principal consultant Mick Faulkner. 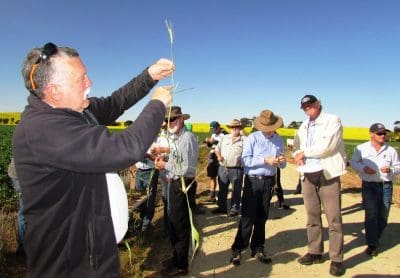 “Until now, frost identification has often been registered by the presence of ice at or after dawn, at ground level near the farm residence,” Mr Faulkner said.

“But this may not reflect the actual temperatures at the susceptible parts of a paddock where crops are being grown.

“Often frosts that have occurred earlier in the night but have cleared by dawn are missed, and frosts that caused ice on lawns are assumed to have had a similar effect in paddocks but that may not necessarily be the case.”

Temperature monitoring equipment, such as Tiny Tags, iButtons and weather stations, are currently commercially available and can help inform growers’ frost mitigation strategies and enable them to accumulate data over numerous seasons to develop farm frost incidence and severity maps.

Such equipment is recommended as part of an integrated management plan to enable growers to build their knowledge base of their properties to mitigate the impacts of frost, a central focus of the GRDC’s NFI, of which the spatial temperature measurement and mapping tools project being led by Steven Crimp from CSIRO is a major contributor.

Mr Faulkner said temperature loggers should be situated at or just above the canopy height and raised every week or so during the growing season to account for crop development, particularly when the head was emerging (booting to milk development or Growth Stage 40-80).

“As this is the most sensitive stage for the plant, accurately measuring temperature experienced by the head is most critical at this stage.”

Where possible, monitoring should be done in a number of locations that take into account differing factors that influence frost impact, such as varying landscape gradients (on the flat, break of slope and a short distance up a slope in areas affected by cold-air drainage) and soil types (particularly from darker loamy soils to lighter sandy soils).

While this is the most accurate method to collect data on the temperature the plant has been exposed to and likelihood for frost damage, data from sites further away, such as fence lines or other weather stations on the property, may still be useful.

Mr Faulkner, who is also a member of the GRDC’s Southern Regional Cropping Solutions Network, said using data from the closest Bureau of Meteorology site to determine farm temperature might be valid for some farms but was usually inadequate for most.

As part of the NFI project, in which Agrilink is involved, temperature loggers have been installed at trial locations in the Mid North of South Australia as well as at a number of on-farm monitoring sites for the past two years.

The results indicate minimum temperatures between the BOM sites (1.2 metres above bare ground) and the height of the crop fluctuate significantly and there is greater variability in temperature in spring than winter.

Mr Faulkner said the time from frost damage occurring to identification was critical.

“Identification of frost damage is important because it enables a grower or adviser to understand the impact of frost on yield and extent of the area of damage. Assessment provides information on financial exposure and immediate mitigation options which include cutting for hay or silage, and grazing a standing crop.”

Mr Faulkner advises that the parts of crops that should be inspected regularly include:

More information on frost management can be found in the GRDC Tips and Tactics publication, www.grdc.com.au/ManagingFrostRisk, and via the via the GRDC’s suite of GrowNotes publications at https://grdc.com.au/Resources/GrowNotes.