UNDERSTANDING the key factors driving crop yield has reaffirmed time of sowing (TOS) as the main driver, endorsing the long-held practice of planting cereal crops within their optimum sowing window to maximise potential. 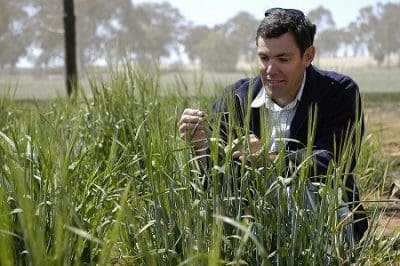 NSW DPI research agronomist Rick Graham has been investigating the impact of time of sowing on crop yields in dryland environments.

The impact of time of sowing on yield potential was consistent across trial sites at Nyngan, Trangie and on the Liverpool Plains.

These sites included a mix of lower and high rainfall environments to demonstrate the combination of wheat variety and maturity type on crop yield, together with other agronomic inputs.

“A decline in crop yield was demonstrated across all sites with delays in sowing. At Nyngan in 2015 for example, a 2.65 tonnes/hectare yield achieved for an earlier sowing window option (May 8) declined to 0.8t/ha, with a 20-day delay in sowing time,” Mr Graham said.

Long and early maturity wheat cultivars were used in the trials, and regardless of variety, all cultivars demonstrated a ‘plastic’ response in crop yield to time of sowing across the different sites, indicating genotypes can adapt across geographic regions with a main season sowing date.

Gregory and Sunvale were trialled as main season varieties, with Crusader and Spitfire as earlier maturing options.

The research reinforced the TOS message on crop yield, but in different environments there are genotype by management options, where growers can use a faster maturing variety, such as Spitfire together with increased plant populations, to maximise crop yields in lower rainfall environments.

Unlike the western trial sites, the softer Liverpool Plains environment did not demonstrate a plant population response, indicating wheat plants can compensate with increased tillering, where plant populations are at the lower end of the recommended plant establishment rate in higher rainfall environments.

Mr Graham said the message to growers was to spread risk by selecting different wheat varieties and maturity types, and sowing within the early to mid-sowing window for each variety.

“Sow your best variety for the district as early in its optimum sowing window, as practicable. But note, quicker maturing varieties, such as Crusader at the Nyngan trial site, did increase crop yield in lower rainfall environments,” he said.

Increasing plant populations also increased crop yield, so growers can increase sowing rates of wheat varieties to compensate for delayed sowing. However, the research showed that this approach was unlikely to fully compensate for the decline in yield from delayed planting.

Crown rot was introduced to the trial plots, via sterilised Durum infected with the crown rot fungus. Spitfire although more tolerant of crown rot than other varieties, such as Gregory, still had a reduction in yield with delayed sowing, compounded by crown rot infection.

There was little measurable crop response to nitrogen and phosphorus application across the trial sites, however the higher the plant available water capacity (PAWC) of the soil, the higher the potential N response on crop yield.

Frost impacted the Tamarang trial site in 2014, indicating that even when planting in the correct sowing window for crop variety there is still a risk of frost impacting crop yield.

“The risk of frost impacting crop yield is real, but heat stress during grain fill in the spring has potentially more of an impact, especially in drier environments. TOS has a known impact on crop yield and grain quality, and growers can plan their cropping programs accordingly.”