CENTRAL Queensland (CQ) University Bundaberg students Branyon Apel and Polani Shadur have won $10,000 with their prototype of a Flexible Fertigation Pump System for orchards and farms, as part of the Telstra Innovation Challenge 2017. 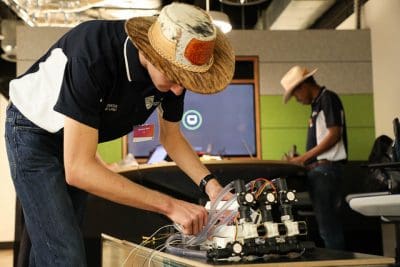 CQ University Engineering (Mechatronics) student Branyon Apel and Agriculture student Polani Shadur teamed up to represent the CQUniversity School of Business and Law in the ‘University’ category of the Challenge.

The students teamed up to represent the CQUniversity School of Business and Law in the ‘University’ stream of the Challenge. They beat the other two finalist teams from RMIT and Macquarie University.

Along with a team coordinator, associate lecturer Tim Whan, they were flown to Melbourne, to pitch their pump system which allows bespoke levels of nutrients and chemicals to be applied to specific parts of an orchard or farm to suit soil types, conditions and plant varieties.

The prototype system drew on a supplied competition kit including a microprocessor, a cellular shield, sensors, switches and LEDs.

“The pump operations and chemical delivery levels are communicated via the 4G cellular network to mobile technology,” Mr Shadur said.

“This does not require a pump technician to be physically present to operate the manual systems that are less accurate and less responsive to varietal and soil requirements.”

Mr Apel said he was attracted to help with the hardware and software for the pump system due to his background growing up on a grazing property and his current studies in Mechatronics.

“The system monitors its own health in terms of pump temperature, source water level and output pressures, as well as recording the nutrient dosages applied in each geographic area of the farming operation,” he said.

Mr Apel also attributes his success to studying at CQUniversity, saying “the Engineering courses and the content I’ve been exposed to really helped me to ascertain the important aspects the judges were looking for, giving me the skills to get my point across quickly and accurately”.

The Mechatronics student is now working on his next big challenge after being nominated by Dr Ramadas Narayanan for Engineers Australia’s Warman Design & Build Competition in Sydney this October.

Mr Shadur was born in Zimbabwe and moved to Australia as a young child. He initially trained and worked as a radio technician before moving to Childers with a plan to use his CQUni Agricultural studies as a pivot into a career in sustainable farming.

Recently, his work experience in the Ag industry has turned into part-time work with Austchilli, the largest chilli company in Australia (and leaders in the food manufacturing industry).

This background and his career aspirations convinced him to help discover client needs and dosage rates for the pump system.

Mr Whan said the winners received a current 4G smartphone, a medallion and a share of the $10,000.

“The CQUniversity School of Business and Law team got through two preliminary rounds of online judging in late April and early May,” he said.

Dr Ben Taylor, who nominated the Engineering student for the CQUni team, said he knew Mr Apel was streaming towards his Mechatronics career when he led an industry team project in his first year and produced a functioning prototype model of an autonomous cattle drafting yard.

“Our project-based learning curriculum enables Branyon and his peers to challenge themselves, chase their dreams, and demonstrate leadership, innovation and a propensity to create sustainable engineering solutions,” Dr Taylor said.

“The Telstra Innovation Award ratifies this and is an outstanding achievement for the CQUni team.”

The Telstra Innovation Challenge was presented in partnership with Landmark to ‘Build the future of agriculture’.  Gold sponsors of the Challenge included Cisco, Jasper, Ericsson, HTC and Intel.  Silver sponsors included Microsoft.