Voice-over Wi-Fi is coming and could be rural game-changer: Nuffield scholar 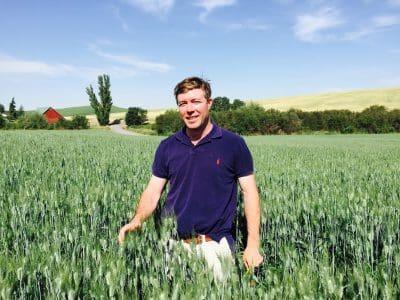 “Surveys show that around 40 per cent of all rural Australian users currently use 3G/4G as their primary home internet and pay on average the highest monthly rate for service and receive the least amount of data allowance,” Mr Graham said.

“Key technologies servicing rural areas such as 3G coverage and the interim NBN satellite are constantly over capacity and provide poor services in peak times.”

Since returning to his mixed family farm operation of Angus cattle, Merino sheep, mixed crops and a sand quarrying operation on 3600 hectares at Coolac on the south west slopes of NSW, he has seen first-hand how technology in agriculture can increase productivity and efficiencies.

He said the current state of rural broadband in Australia was lagging behind other countries internationally, but there were signs of improvement through the implementation of NBN in rural areas.

“While ADSL services offer a more consistent product, it is only accessible for those located in town close to the telephone exchange.”

During Mr Graham’s Nuffield research, he travelled to the United States, England, Ireland, Switzerland, China, Canada and France and said high-speed rural connectivity was a common problem worldwide, with the common solution being fixed wireless. 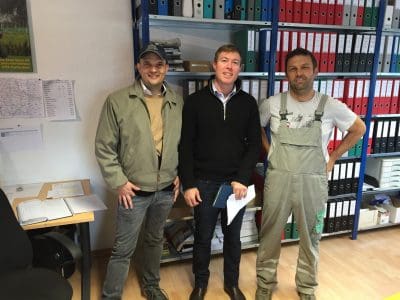 Jock Graham with Thomas Estermann and a farm hand from Estermann contracting in Switzerland.

“It’s the best option for rural users who have no access to fibre. In Australia this could be either NBN or private, which will deliver the fastest speeds, high data allowance plans with the lowest latency and cheapest monthly cost,” he said.

“Mobile 4G service offers a great service when in a coverage area in terms of speed but is not recommended for home broadband due to the high data plan costs and the congestion that occurs in peak times as it’s a shared service with all other mobile devices.

“NBN Satellite, known as Sky Muster is the next best option for rural users, being accessible from any rural location, offers good download and upload speeds and plan pricing, but has limited data allowances and high latency compared to fixed wireless.

“The use of private networks run either by businesses, communities or individuals are the key to linking rural communities to the faster, low latency, high data allowance internet services, and extending ground services to more remote communities currently covered by satellite only.”

“The femtocell device connects to a home broadband connection and projects signal in the home whilst the Cel-fi device boosts the existing signal throughout the home, and is the most widely used technology to improve in home coverage,” he said.

“The game changer however is voice over Wi-Fi, a new protocol being implemented in Australia this year which allows certain smart phones to switch to Wi-Fi service if mobile service is patchy to make and receive calls.

“I found this technology already implemented in most countries in Europe, so it is pleasing that it will be integrated into Australia’s two biggest mobile networks this year.”

Mr Graham believes the opportunities provided by this technology will bring a new technological advancement age for agriculture by enabling online connected tools to be implemented.

“Internet of Things” devices (IoT) and farm sensors can start to be implemented across farms, monitoring water levels, soil moisture, livestock locations and other valued information at low cost,” he said.

“The transfer of precision farming data in large volumes could better enable automated systems and machinery for greater efficiencies.”

But Mr Graham said one of the key benefits lies beyond the paddock.

“It is so important that our rural communities get a level playing field and access to various online business tools, to online health and education resources and social connectivity. By ensuring that our rural areas are more liveable, we can ensure agriculture continues to grow,” he said.

Nuffield Australia provides opportunities to Australian primary producers and managers to travel the globe investigating a research topic important to them and Australian agriculture. Scholars are provided with a $30,000 bursary to embark on a 16-week program consisting of both group and individual travel over a two-year period.