If you can roll soil into a thin sausage and it maintains shape, the clay content in the soil indicates it is too wet to rip.

But researchers warn there needs to be careful consideration of how wet the soil profile is and what crops will be sown on the ripped area.

WA Department of Primary Industries and Regional Development (DPIRD) research officer, Wayne Parker, said research with GRDC investment was indicating that if paddocks were too wet, deep ripping could do more harm than good and this year it would be particularly valuable to check moisture at the depth to be ripped.

He said this could be done by rolling a handful of soil into a three-millimetre diameter-thin sausage to test its cohesion.

“If you can roll it into a thin sausage and it maintains shape, the clay content in the soil indicates it is too wet to rip,” he said.

“Soils in this state will smear, instead of fracturing, and increase soil strength along the ripping line – making a hostile zone for root growth and negating any positives from loosening the soil.”

Mr Parker said another option to assess suitability for deep ripping was to rip a strip of a paddock and dig a hole behind the furrow to examine the ‘breakout’ profile of the soil.

“The required shape is a ‘V’ from the bottom of the ripping tyne,” he said.

“If the hole takes a ‘Y’ shape, the soil is shattering from further up the tyne – not the point – and this creates horizontal compaction on the sides of the tyne.

“This damages the soil profile and makes it hard for crop roots to get through that section of the soil.” 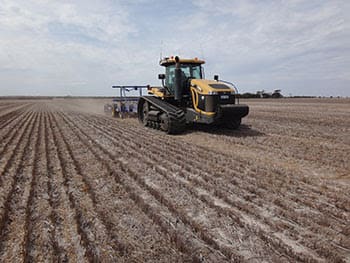 “Combined with the re-compaction that occurs within the first pass, a big investment in the soil can then become redundant within 12 months,” she said.

“But the optimum value comes from a single rip that generates several years of yield response.

“Research has shown controlled traffic farming (CTF) also needs to be considered as part of any deep ripping system to minimise re‐compaction and increase the longevity of the benefit.”

Ms Isbister said key elements of deep ripping that would affect the benefits to crops and grower bottom-lines when used in wet conditions included soil moisture levels, tyne spacing, soil breakout and use of rollers.

She said wider-spaced tynes (of about 100 centimetres) tended to leave bigger, unbroken and high strength soil ridges in the profile and this effectively shattered less soil than narrower tynes.

“This can be beneficial, as less tynes mean less horsepower and more area can be ripped for a similar cost,” she said.

“Use of weighted rollers, either towed behind the ripper or used after, to firm and level the surface is important for the finish of soil surface and to enable sowing depth control and good establishment around seeding.”

Researchers also stress the need for growers to carefully plan crop types to be sown on deep ripped areas.

“Trial data indicates that, in sandy soils, significant and consistent yield gains and returns on investment are possible in cereal and canola crops after ripping to a depth of 50-70cm, compared with no deep-ripping,” Ms Isbister said.

“But DPIRD trials assessing lupin yields after deep ripping have been more variable, with a penalty observed in 2016 in some areas.

“The yield response in heavier soils is lower and deep-ripping to 35cm can result in a yield penalty in some seasons with a very dry finish (such as 2016), or where there are other soil constraints.

“This is due to plant roots not being able to access moisture below the hardpan late in the season.”

Ms Isbister and Mr Parker have prepared comprehensive tips and tactics for seeding into deep ripped soils that are available at https://www.agric.wa.gov.au/soil-compaction/seeding-deep-ripped-or-renovated-soils

More detailed information about deep ripping and CTF can be found at https://agric.wa.gov.au/n/105.

GRDC is investing in further deep ripping research across the WA grainbelt in 2018, including four new trials planned in the Kwinana East and Esperance Port zones at Wyalkatchem, Salmon Gums and Grass Patch. These will investigate ripping in soils other than responsive deep sands and complement seven existing DPIRD trials with investment from GRDC’s Soil Compaction project.

Understanding the impacts of deep ripping and latest trial results stemming from the use of this tactic in WA will be discussed at next month’s Grains Research and Development Corporation (GRDC) Grains Research Update in the Geraldton port zone and in Perth.

These events are scheduled for Northampton on Friday, February 23, and Crown Perth on February 26-27. More information, programs and registration details are available at https://grdc.com.au/updatedates or on the Grains Industry Association of WA (GIWA) website at http://www.giwa.org.au/2018researchupdates