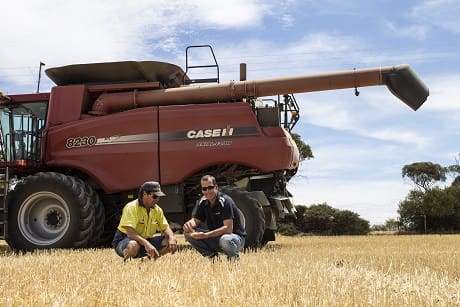 YP-AG partner and director, Chris Davey (right), works with his grower clients, including Gary Bruce (left), to plan integrated weed management programs that include as many of the WeedSmart Big 6 tactics as possible.

CHRIS Davey, partner and director of YP AG at Kadina in South Australia, has worked with growers on the Yorke Peninsula for over 20 years, assisting them to devise weed control programs that reduce the impact of herbicide resistance.

His group of 20 clients farm between Port Broughton and Arthurton with annual rainfall ranging from 300 to 500 millimetres and very diverse soil types.

Mr Davey initiated the Northern Sustainable Soils farmer group in 2007 to provide growers with the opportunity to research farming system tactics and discuss their ‘fit’ for the highly variable soils found on the Peninsula.

“This variability drives many management decisions and has a direct relationship with many of our weed problems.”

Annual ryegrass and brome grass on the Peninsula are known to have resistance to herbicides in Groups A (fop and dim), B, D and M and wild radish is resistant to Groups B, F and I.

“This area was the home of ryegrass resistance and growers are trying hard to avoid the same blow-out situation with brome grass,” Mr Davey said.

“Growers are well aware of the potential consequences if resistant brome grass gets out of hand so most are using some form of patch management and even chemical fallow in blocks where the brome grass has out-competed the crop.”

In response to increasing herbicide resistance, 85 per cent of Mr Davey’s clients have adopted some form of harvest weed seed control within their weed management program.

“Sixty per cent of my clients are using narrow windrow burning and 25 per cent are using either a chaff cart or chaff lining chute,” he said.

“In the 2017 harvest there was also one iHSD and one Seed Terminator operating here.”

Mr Davey is a strong supporter of all the tactics in the WeedSmart Big 6 and actively promotes the inclusion of all tactics in his clients’ integrated weed control programs.

The close lentil/wheat rotation that has dominated farming systems on the northern Yorke Peninsula in recent years is acknowledged as a weak link in terms of weed control. 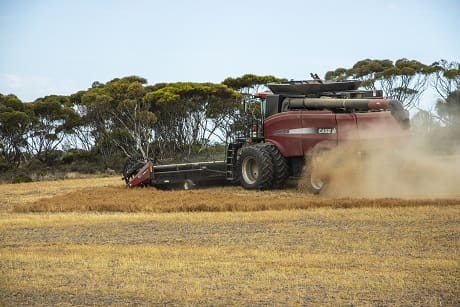 Lentils have provided several economic and weed control benefit to farming systems on the Yorke Peninsula but the short lentil/wheat rotation is a definite weakness when it comes to managing herbicide resistance.

This rotation has led to an increase in broadleaf weeds such as milk thistle and prickly lettuce, with bifora, tares and medic also exploding in the lentil phase in some years, leaving a high weed seed bank for the following year as well as increasing the risk of herbicide resistance evolution.

Mr Davey said the economic drivers for the rotation could make weed control decisions difficult and there was a need for other profitable rotation options that could assist in reducing weed pressure.

The main problem with the short rotation is that weeds are exposed to the same herbicide modes of action every two years.

Although imi-tolerant (Clearfield) varieties have been very useful, particularly PBA Hurricane lentils, allowing the use of Group B herbicides in the crop or in previous seasons, the alkaline soils on the Peninsula have expedited the more rapid evolution of Group B resistance in wild radish, mustard, milk thistle and ryegrass.

Glyphosate resistant ryegrass is widespread on the Yorke Peninsula, primarily along fencelines but as fences are removed to form larger paddocks, there is a significant risk that the resistance gene will be spread by headers.

An annual double knock application before seeding is considered very important to help protect the efficacy of glyphosate and is widely practiced on the Peninsula.

Sowing earlier to achieve a yield advantage and dry sowing can impact on the use of double knock.

Mr Davey advises his clients to avoid early or dry sowing in weedy paddocks and to hold off sowing until the double knock has been implemented, even though there could be a yield penalty.

Under dry, dusty conditions most growers will choose two contact herbicides such as paraquat or paraquat/diquat rather than glyphosate/paraquat for the double knock.

There is a heavy reliance on pre-emergent herbicides on the Yorke Peninsula and in weedy paddocks growers need to use additional shots to drive down weed numbers to preserve yield.

In cereals, the Boxer Gold and Sakura applications are often spiked with triallate to strengthen the pre-emergent efficacy because there are no in-crop herbicide options in wheat and barley crops.

Pre-emergent herbicides are also very important in lentils as the main break crop to reduce ryegrass numbers so there is less pressure on the clethodim/Factor mix in crop.

Trifluralin susceptibility in ryegrass has been very low since the late 1990s and so is not a tank mix option, unless targeting broadleaf weeds like wireweed or three corner jack.

The permit for Weedmaster DST use to crop-top in barley provides a useful control tactic for radish and ryegrass at the end of the season, but is often too late for brome grass, which has usually already set seed by this stage of the crop.

In blow-out situations Mr Davey often advocates for the ‘short-term pain for long-term gain’ of a chemical fallow using paraquat or Spray.Seed.

He suggests the chemical fallow is the best tool to use if brome numbers are building up in a paddock.

In his experience, the performance of the following crop usually makes up for the one-year sacrifice due to increased nutrients and moisture availability.

He said some growers planned for the inclusion of a small portion of the rotation to be sown as a chemical fallow, while a larger number would use chemical fallow only in a failed crop or for a weedy portion of a paddock as a patch management option.

Where the soil type allows, Yorke Peninsula growers have readily adopted east west sowing having seen the benefits of this row orientation promoted through the Australian Herbicide Resistance Initiative (AHRI) and WeedSmart.

Some soil types, such as the sand swales around Port Broughton, dictate sowing direction but it is an option in other areas.

Mr Davey’s trial work with HWSC shows the importance of getting the weed seed into the header.

He said brome grass could be difficult as its flexible stem didn’t always get cut and could flick back up once the harvester had passed.

Wild radish generally stands up well with 70–80 per cent of seed entering the header. 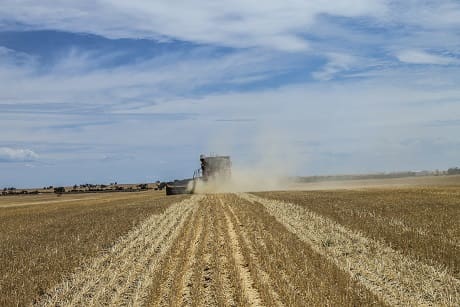 Even with a 50 to 60pc capture of brome grass, depending on the season and how early harvest occurs, HSWC is still an important part of any weed management program.

Capture of ryegrass seed is seasonal with the ryegrass lodging in some years and not picked up by the header, while it will stand up well and achieve 80pc capture in other years.

Once weed seed is in the header, Mr Davey’s research has shown that it doesn’t matter what HWSC method is used – all are effective.

Chaff carts and narrow windrow burning (NWB) have been widely adopted for many years but he expects that chaff lining and chaff decks is likely to increase while NWB will decrease in use.

Chaff lining was widely adopted in 2017 harvest as an economical and easy way to manage weed-laden chaff.

He also expects some growers with larger areas and some contractors to purchase iHSD and Seed Terminator modules, with one each of these operating in 2017 harvest on the Peninsula.