NEW wheat varieties with improved resistance to the significant fungal disease Stagonospora nodorum blotch (SNB) are on the horizon, after a scientific boost from the new draft wheat genome. 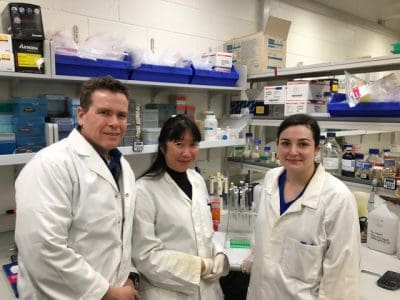 Researchers at Western Australia’s Department of Primary Industries and Regional Development (DPIRD) have been working with the State Agricultural Biotechnology Centre at Murdoch University to apply the new data from the draft wheat genome to the SNB resistance pre-breeding research.

Department senior research officer Michael Francki and his team were surprised to find several new genes related to fungal disease resistance, which will help to refine the location of molecular markers for SNB.

“The draft wheat genome has enabled us to identify more than 12 fungal related genes in the same chromosomal regions that we know control SNB resistance,” Dr Francki said.

“These candidate genes will assist the project team to target a suite of new molecular markers for SNB resistance.

Dr Francki said the data from the draft wheat genome provides greater accuracy and confidence in identifying these new genes and their effects on SNB resistance in different grain production environments.

“While the wheat genome is currently in a draft form, there is still some work needed by the global consortium to complete a high quality whole genome sequence,” he said.

“In the meantime, we will continue to refine our SNB work and identify the causal gene sequences for resistance, as more data from the wheat genome becomes available.”

This work builds on previous research gains made as part of the Effective Genetic Control of SNB project, supported by the GRDC.

“We previously identified several genes that combine to create SNB resistance, using germplasm from across Australia, the United States, Norway, the International Maize and Wheat Improvement Centre and the International Centre for Agricultural Research in the Dry Areas,” Dr Francki said.

“The genes identified from the draft wheat genome sequence will add to the existing repertoire of DNA markers for SNB resistance to improve marker-assisted selection in commercial wheat breeding.

“This discovery opens the door to the development of more tailored, robust varieties with improved SNB resistance, which perform well in a range of locations throughout the Western Australian grainbelt.”

Dr Francki expects that the candidate genes will be used to accelerate the development of improved varieties in commercial wheat breeding to maintain yield and profitability for WA growers under SNB epidemics.