ALL of the Rocky movies go the same way. Rocky gets beaten, then fights back, and in the last fight he is taking an absolute beating when the inspirational music starts up in the 15th round and Rocky somehow musters the courage to rise from the ashes and win the fight against all of the odds.

We were on the ropes with wild radish about 10 years ago with multiple herbicides failing and the farmers wondering what the future would hold, when over the hill, riding on a white horse, came Bayer with some new herbicides. Precept and then Velocity containing the HPPD inhibitor (Group H) pyrasulfotole changed everything.  Not getting Sylvester Stallone to do the marketing was a missed opportunity! 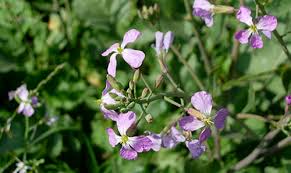 The first resistance to HPPD herbicides in wild radish has now been discovered by Australian Herbicide Resistance Initiative (AHRI) researchers led by PhD candidate Huan Lu. Wild radish is just the third weed in the world to evolve resistance to this group of herbicides.

The wild radish in this research was resistant to several other groups of herbicides which may have led to metabolic resistance to HPPD.

Looking forward to Rocky VII, I wonder how that movie will turn out!? Adrien!!

The resistant population of wild radish was sampled from the northern wheatbelt of Western Australia in 2015 during the AHRI random survey conducted by Dr Mechelle Owen every five years. This population tested to be resistant to the herbicides in the table below.

First round of testing for HPPD resistance

Wild radish plants were grown in pots to the 2-3 leaf stage (6-8cm), then sprayed with Callisto (mesotrione). Eleven plants survived which were grown to maturity and hand pollinated to create the resistant population that underwent further testing.  Callisto herbicide is not normally applied to wild radish post-emergent so this isn’t considered a robust test for resistance on its own.

The seed from the eleven surviving plants in the first round of testing was then tested as a dose response to three HPPD herbicides and compared to two known susceptible populations. While it could be argued that this isn’t the normal use pattern for all of these herbicides, we can’t argue with the fact that there’s a shift in the dose response curve.

This is low level resistance. The resistant population is just 4-6.5-fold resistant compared to the susceptible populations. But we must keep in mind that this is under controlled conditions in the laboratory where spray application occurs in a spray cabinet and plants are watered regularly. If plants are resistant in this environment, they will certainly appear resistant in the field!

What is the mechanism of resistance?

This is always a process of elimination. Huan Lu used the P450 inhibitor, malathion, to turn off the P450 genes prior to spraying with tembotrione and found that this could reverse tembotrione resistance providing an indication of cytochrome P450 genes. This approach didn’t work to reverse mesotrione or Isoxaflutole resistance and it’s likely that there are other metabolism-based resistance mechanisms at play that will be the subject of further research.

What’s clear is that this wild radish population has metabolic resistance and is resistant to several HPPD herbicides.

It appears that many years of selection with other herbicides has led to metabolism-based resistance in this population of wild radish which has then caused resistance to the HPPD herbicides.

This is not the first time this phenomenon has occurred. One of the first populations of Pigweed (Palmer amaranth) from the USA was also found to be resistant to HPPD herbicides despite never having been treated with this herbicide.

Wild radish is one of the world champions of evolving resistance to herbicides, so we knew this was coming. At present this is very rare and is only low-level resistance, however it should serve as a warning of what could be to come. There are new herbicides on the way, however metabolic resistance knows no bounds and some of these new herbicides could be under threat before they are even released. As always, the WeedSmart Big 6 is a great checklist to look at to ensure that we’re not entirely reliant on herbicides for wild radish control.  New herbicides are coming, but so is Rocky VII and let’s face it, Stallone isn’t getting any younger. He might just go down next time!