THE COST of transporting bulk grain by rail in eastern Australia could be in for a hike from July next year if the Australian Rail Track Corporation (ARTC) changes its fees structure in its next Interstate Access Agreement (IAU). 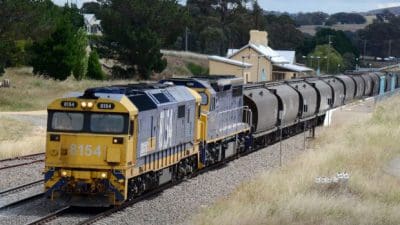 ARTC is Australia’s major regional rail infrastructure owner, and a replacement for its current IAU, which came into effect in 2008, will include its rate-card for on-rail operators who haul containerised and bulk freight.

In December, the Australian Competition and Consumer Commission (ACCC) knocked back ARTC’s initial proposal for the new IAU, and ARTC said it was yet to submit a revised application.

Industry sources have told Grain Central they are concerned the new IAU proposal will include higher rates for bulk grain, which could push more freight tasks on to roads.

A price hike would come if ARTC removed its ad hoc grain rate and apply a fixed or “regular” freight rate, which they say could add up to $1.70 per tonne to the cost of carrying wheat, and $2.20/t for barley.

“This will smash farmers,” one source said.

“Bulk grain should be exempt from that, especially in this drought period.

“That’s the last thing we need.”

Sources said the route from north-west NSW to Newcastle and Sydney would be the hardest hit by a change from ad hoc to regular rates, while the southern NSW-Melbourne and Riverina-Port Kembla routes could incur an extra $0.70-$1/t.

“It would affect the flag-fall, or rate per train, and the gross tonne-per-kilometre fee.”

To cover the period between the old and the new IAU, ARTC published a standing offer on freight rates, effective 1 July 2019.

Following feedback from stakeholders regarding the impact of the proposed rate changes, and the drought’s effect on the grains sector, ARTC amended the standing offer to include ad hoc rather than regular rates until 30 June 2020.

ARTC said it has reserved the right to review the rates applicable from 1 July 2020.

A range of industry participants are currently finalising submissions in relation to the proposal prior to Friday’s ACCC deadline.

One of those is Pacific National (PN) which, along with Southern Shorthaul Railroad (SSR), is eastern Australia’s main carrier of bulk grain.

“We want to make sure access-pricing is cost-effective and efficient for regional producers and rail freight operators to ensure haulage of bulk grain doesn’t shift from trains to trucks,” Pacific National regulatory and policy manager Robert Millar said.

“Anything that is not going to grow grain volumes on rail is something we couldn’t support.”

Mr Millar said PN would be advocating to its customers that they need to determine how ARTC’s pricing will affect them, and what changes the government-owned network will need to make to ensure rail remains the logical choice for hauling bulk grain.

Its and SSR’s bulk grain customers include domestic end-users such as flour millers, and trading companies.

“It’s not going to be to the benefit of the grain industry,” Manildra Group national transport and logistics manager Mark Owens said.

Rail wagons in NSW and Victoria generally carry more than 60t of wheat, and around 50t of barley.

In the current drought period, rail has been crucial in getting bulk grain from South Australia to central and northern NSW, and in normal years is an important pathway for the export supply-chain.

“The IAU continues to undergo a consultation process and it is important to note that pricing was not included in the 2018 IAU application,” Mr Ormsby said.

Mr Ormsby said ARTC’s access charges were just one component of its overall transport-cost base, and ARTC was working closely with the agricultural supply chain, and consulting with stakeholders on the IAU.

“Our primary interest is to attract more freight on rail in a hyper-competitive environment with road.”

He said ARTC had driven significant cost efficiencies and freight savings across the supply chain through areas such as enabling higher axle loads, and bigger and longer trains, and the introduction of longer loops and new train-management and planning technologies.

ARTC is a commercially operated Australian company, and describes itself as the only component of the supply chain that has published and transparent pricing which is approved by the ACCC.

“We are of the view there should be fair pricing that reflects use, operation and capital investment into infrastructure.

“We manage the balance between the commercial demands of our business, our fiscal responsibilities to the Australian Government and taxpayer, to whom we pay a dividend, and the safe and efficient operations of our assets very carefully.

“We do this in the context of ensuring our pricing structures are right in a competitive environment whilst ensuring a sustainable business.”

ARTC submitted its proposal for a new IAU to the ACCC in March last year.

In December, the ACCC knocked back the proposal.

In its Valuation approach for the Interstate network Issues Paper released last month, the ACCC said one of its major concerns with ARTC’s 2018 IAU application was its proposal to roll forward the Regulatory Asset Base (RAB) from $3.7 billion in the 2008 IAU to $10 billion in the 2018 IAU.

The ACCC said this was done “without sufficient evidence and justification that expenditures incurred by ARTC over the term of the 2008 IAU were prudent and efficient”, and it could not determine whether ARTC’s proposed RAB roll forward was economically efficient.