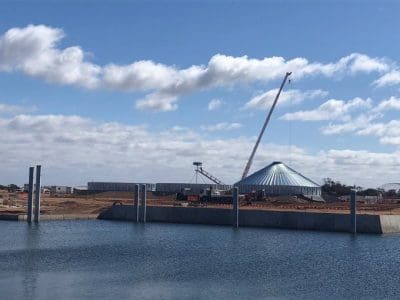 GROWERS delivering to T-Ports facilities on South Australia’s Eyre Peninsula (EP) will be able to deliver to Flexi Grain pools and sell for cash to ADM Australia as well as warehouse grain from the upcoming harvest.

Flexi Grain announced this week it would be offering its area-based and fixed tonnage pool contracts at the sites, which will open in coming weeks to make T-Ports the newest entrant in South Australia’s bulk-handling market.

“We don’t offer cash pricing, but we do operate pools, so if harvest pressure comes along and prices drop, they are a good option for growers to use,” Flexi Grain SA Regional Manager Sam Grieve said.

“Our 10-month pools are designed to capture good markets, and they’re another option for growers delivering to T-Ports.”

ADM last month announced it would be posting cash prices for growers delivering to T-Ports.

“The grain supply-chain in South Australia is evolving, and T-Ports’ presence on the Eyre Peninsula will provide growers with choice and competition in the supply-chain.”

Flexi Grain was established in the Victorian Mallee in 2013, and expanded into Western and South Australia in 2017, while ADM, through its acquisition of Alfred C. Toepfer, has a long history in Australian grain trading.

ADM this month opened a bulk-handling site at Port Pirie, north of Adelaide, its first in Australia.

This season has brought mixed fortunes to the EP, which is on track to produce a significant amount of grain available to the export and domestic market.

Most crops on the Central and Lower EP have average to above-average yield prospects, helped by falls of 20-50 millimetres in the past week, while some crops on the Upper EP have failed.

They have not received enough in-crop rain to produce a harvestable grain crop, while some crops on the Upper EP have been cut for hay, and others with very low biomass have been left to provide ground cover over the summer.

Up-country bunker storage sites at Lock and Lucky Bay have a combined capacity of about 500,000 tonnes

The Lucky Bay port site includes steel silos which can store about 24,000t of grain, receival and loading facilities, a vessel which can tranship around 3500t of grain from port to bulk vessel, and a fertiliser import and storage facility.