One of the few completed sections of the Inland Rail, the North West Connection, near Parkes in New South Wales. Photo: ARTC

THE AUSTRALIAN Government has today announced the appointment of Kerry Schott AO to lead an independent review into the Inland Rail project.

The review will consider the process for selecting the Inland Rail route, including stakeholder consultation, and assess the project’s scope, schedule and cost.

The review will also assess options for the new Inland Rail intermodal terminals to be built in Melbourne and Brisbane, and improving rail links to the ports in these cities.

This will include investigating potential end points for Inland Rail Service Offering in Brisbane, including Ebenezer, Kagaru, Bromelton, and/or Acacia Ridge.

The review will have regard to existing studies, such as the Toowoomba to Gladstone Inland Rail Extension Business Case.

It is expected to be completed by early 2023, with the government intending to release the findings of the review once it has an opportunity to consider them.

Federal Minister for Infrastructure, Transport, Regional Development and Local Government Catherine King said a review is necessary because Inland Rail is too important to stuff up. 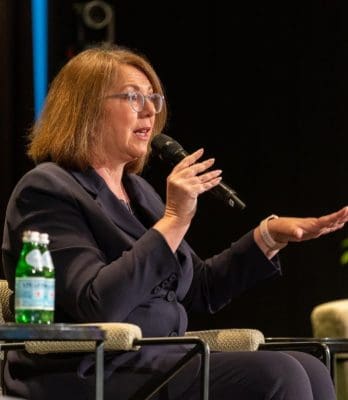 “The review will give the Government a clear-eyed view on what the problems are and the way forward,” Ms King said.

“Dr Schott is a highly respected and trusted leader who brings a wealth of experience from both the business and government sectors to the role.

“She will conduct a thorough and independent review of Inland Rail and make recommendations to ensure this nationally significant project is successfully delivered.”

Ms King said the Inland Rail is an important part of building additional capability and capacity to increase the resilience of Australia’s freight supply chain and meet our growing freight task, which is forecast to grow by up to 35 per cent by 2040.

Moving freight off the roads and on to rail will help with the task of decarbonising while helping regional cities grow by providing more opportunities for jobs and industries.

The Australian Government has today also released the Final Report of the Independent International Panel of Experts for Flood Studies of Inland Rail in Queensland.

This report included an investigation of the controversial Border to Gowrie alignment in southern Queensland, which some landholders believe should be moved due to flooding risks.

In the report, the panel “found ARTC’s modelling framework to be in accordance with both national guidelines and current industry best practice”.

It identified several issues and acknowledged that the ARTC has agreed to provide more information or address the problem during the subsequent design stages of the project.

The panel also made six recommendations in the report to assist ARTC in its future design and delivery of the Inland Rail project in Queensland, which ARTC has committed to implementing.

These include the guarantee that revisions made from the report will be incorporated into the updated Environmental Impact Statements and that the 2021-22 flood events should be analysed and considered as part of the process.

Ms King welcomed the findings of the Final Report.

“The Government welcomes the findings of the Panel and ARTC’s commitment to implement the report’s recommendations as it designs and delivers Inland Rail in Queensland”, Ms King said.