T-Ports proposed grain terminal at Wallaroo will be its second in South Australia, and plans include 32,000 tonnes of vertical storage. Image: T-Ports

A SECOND grain terminal is set to be built at Wallaroo on South Australia’s Yorke Peninsula as the newest entrant in Australian portside bulk-handling, T-Ports, looks to expand its footprint.

The company is already building a port at Lucky Bay on the Eyre Peninsula, and a bunker site to help supply it at nearby Lock.

T-Ports chief executive officer Kieran Carvill said planning for the Wallaroo port had been under way for several years, and scoping studies of the coastal environment, shoreline, inland freight networks and economic feasibility to ensure the port’s long-term sustainability.

“The port at Wallaroo is the logical next step in the T-Ports journey and we are at a stage now where we are seeking the next stage of approvals with the relevant state-government agencies and the Copper Coast Council,” Mr Carvill said.

The development planned for Wallaroo will include silo facilities with approximately 32,000 tonnes of storage, while a second phase will see construction of bunkers with storage capacity up to 250,000t of grain.

Mr Carvill said construction on the port, which is expected to have an annual grain throughput of up to 500,000t, is likely to begin in 2020, with the site to be operational in 2021.

“There are efficiencies and cost savings in building this port on the opposite side of the Spencer Gulf to Lucky Bay as we will utilise the same transhipment vessel, the Lucky Eyre.”

The vessel is currently having material-handling systems installed in China ahead of her arrival in Australian waters later this year.

A staff of up to 60 including casuals is expected to be employed at T-Ports’ Wallaroo facility during peak periods such as harvest and shipping out-turn. 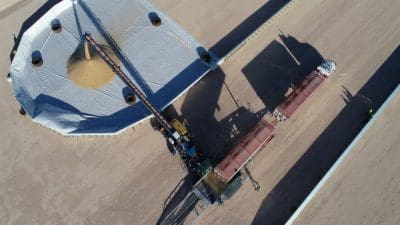 The T-Ports Lock bunker site is being commissioned, and received its first grain this month. Photo: T-Ports

T-Ports has described itself as South Australia’s first farmer and private-equity partnership, and was established last year as a joint venture between Inheritance Capital Asset Management, Duxton Asset Management and Sea Transport Corporation.

“When the approval process is finalised, we will be speaking with growers and offering them the opportunity to become involved as shareholders, as we have done with Eyre Peninsula growers.”

Mr Carvill said T-Ports was looking forward to being able to offer growers in the Yorke Peninsula and Mid North regions an alternative supply chain.

South Australia is the only Australian state which has one entity — the Glencore-owned Viterra — as the owner-operator of all six of its bulk-grain terminals, including one at Wallaroo.