CASE IH has introduced its WD4 Series self-propelled windrower, which made its Australian debut at Case IH’s Red Excellence Tour early in 2016, to the commercial market.

“Following the success of the WD3, we’re pleased to introduce the new and improved WD4 Series, which lives up to our goal of continually improving our products to meet changing customer demands,” said Case IH product manager for hay and harvest, Tim Slater.

“The most significant upgrade in the WD4 Series is a redesigned hydraulic system. We’ve incorporated a header hydraulic drive system that uses two pumps to power two separate circuits on the draper headers. One pump is used to power the header knife drive circuit, and the second powers the circuit for the reel and draper belts.”

The benefit of splitting the two circuits into a ‘high-pressure circuit’ and a ‘low pressure circuit’ is that there is a reduction in the horsepower demand on the windrower which translates into reduced fuel consumption.

“We’ve paid attention to every detail to ensure the new hydraulics truly provide an improved user experience – from maintaining easy access for servicing and better valve performance and reliability, to mechanical locks that keep control cartridges from loosening when exposed to high pressure over time,” Mr Slater said.

Enhanced steering is another improvement to the WD4 Series, with a new hydraulically controlled drive system and rear castor wheels that enable the windrower to turn on itself, almost within its own length.

“We worked with NASCAR specialists, Pratt & Miller Engineering on the design of the steering components, and angled the rear axle swivel post caster at nine degrees, which allows the unit to respond to forward or reversing motions and quick turns while maintaining straight line stability,” he said.

“Self-propelled windrowers are traditionally extremely responsive to steering wheel input which at times can make them difficult to steer, but with the new hydraulic system we can now incorporate AFS AccuGuide auto steering control down to two-centimetre accuracy.” 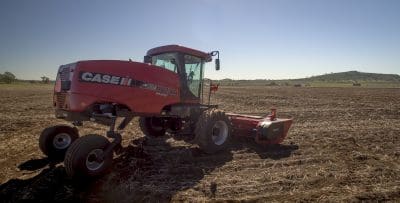 All WD4 units now have 1080mm of ground clearance under the tractor unit, allowing the operator to drive over swaths more easily without disturbing the formed swath. They also incorporate a powered lowering function which aids in the process of changing heads over.

The remodelled cab is another feature of the WD4 Series, which utilises the deluxe cab used on previous versions of the Axial-Flow combine. Enhancements include automatic temperature control, front and rear sunshades, four speakers, windscreen washer/wipers, in-cab electric adjustable mirrors and an AFS Pro 700 display mounted on the console.

Reel controls, header tilt, AFS AccuGuide engage and emergency stop can also all be controlled from the Multi Function Handle.

Updated to match the rest of the Case IH haytool line-up, the roof of the WD4 series has also been remodelled and lights updated to oval shaped LEDs, which give a more modern look while also improving visibility.

The left stubble light can be used to illuminate the fuel tank filler opening and will also remain on for two minutes for egress lighting when the engine is shut down and the cab door is shut.