THE Tractor and Machinery Association (TMA) expects machinery sales for the year to be down on previous records by around 10 to 15 per cent.

TMA executive director, Gary Northover, said manufacturers, dealers and affiliates reflected on the outlook for the machinery market at the recent TMA annual conference in Melbourne

“The general mood in the group was one of caution with regard to the sales outlook with each new month bringing a whole new set of surprises,” he said.

“Indeed, this was reflected in July sales where we saw a sharp drop as it becomes clear that sales were generally brought forward in June to coincide with the end of the financial year thus leaving a gap in demand for the start of the new year.”

Overall tractor sales for the month were down 17pc on the same month last year leading to a year to date figure which is now 11pc behind last year.

Falls were felt in all size categories with the larger end copping the brunt.

Sales in the 200hp (150kw) and above range were down substantially, 24pc behind for the month and now 1% behind YTD. 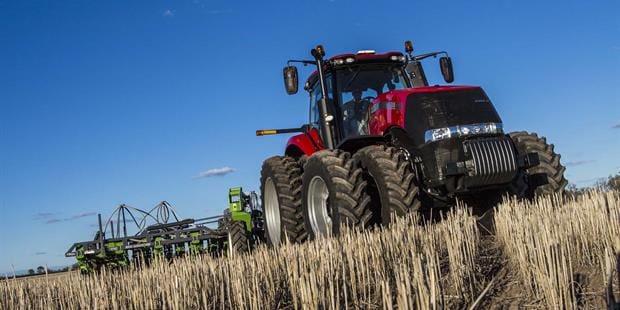 Overall tractor sales across Australia for July were down 17pc on the same month last year.

Across the nation, it continues to be New South Wales suffering the greatest drop in tractor sales, now 21pc behind last year following a 31pc drop in July.

Queensland is showing modest signs of recovery, only 3pc behind for July and now 6pc behind last year.

Victoria had a particularly down month 24pc behind and are now 9pc behind on a full year basis.

Sales in the Northern Territory dropped 10pc for the month, now 3pc behind last year.

In Western Australia, business continues to flourish with a solid July up 7pc now puts them 10pc ahead of last year.

Tasmanian sales are also having a good year, up 24pc in July and now 9pc ahead of year-to-date figures.

Harvester sales are tracking in line with last year and continue to be impacted by the decline in northern NSW grain production. Full year estimates remain in the range of 550 units to occur, down from the mid-800s level of the past few years.

Baler sales continue to perform well as the demand for hay is still strong. In particular, large square balers have been popular driven by growers turning failed crops into forage. Whilst down 3pc for the month, overall baler sales are now 41pc up on last year.

However, Morris Industries and McIntosh Distribution had since diagnosed and rectified the cause of these concerns.

“It has been identified that the hydraulic system was the key area of concern and this will now be updated to effectively reduce stress on the opener, which has also been significantly strengthened,’’ Mr McIntosh said.

“There was an unforeseen issue with the hydraulic system, where certain circumstances allowed pressure to spike up to 1800 psi above operating pressure. This has been resolved with the addition of hydraulic accumulators.

While the issues were mainly experienced in WA’s agricultural region, McIntosh Distribution will roll out the product improvement program nationally across all 2019 and 2020 Quantum air drill units. The initial priority will be to existing Quantum owners.

In addition to resolving the hydraulic issues, the product improvement program will replace the existing welded and fabricated opener on the Morris Quantum air drill to an opener with cast components and a heavier front mount.

“With the enhanced opener, the lower link, rear body and packer arm are all cast design and the bushing housing is machined to a more exact tolerance compared with a welded and fabricated opener,’’ Mr McIntosh said.

“The packer arm has been redesigned to a one-piece packer arm, creating a more even load. These new cast opener parts have all been successfully tested in WA seeding conditions, as well as undergoing significant torture testing by Morris in Canada.’’

He said every Quantum air drill opener in Australia would be updated, amounting to more than 4500 openers across the country. A product improvement program on Morris Quantum air drills is set to be rolled out nationally for growers.

ORGANISERS of the AgQuip machinery field days at Gunnedah in northern NSW report a “full house” of exhibitors for the event to be held over three days next week, August 20-22.

“Companies that haven’t been with us for a while have returned, existing companies have expanded their display areas and the demand from new exhibitors has been significant,” she said. A full house of exhibitors will be present at the AgQuip field days at Gunnedah in northern NSW on August 20-22. (Photo: Robert Chappel)

CNH Industrial has announced a restructure of its agricultural machinery business in Australia and New Zealand, with the appointment of a new leader across both the Case IH and New Holland Agriculture brands. 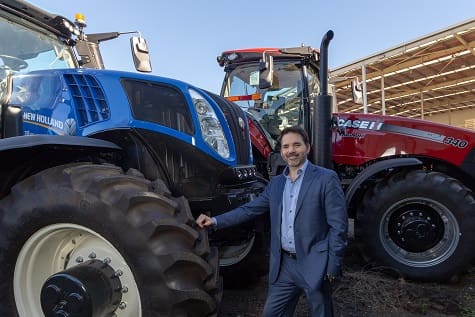 Brandon Stannett has been appointed the managing director – agriculture, Australia and New Zealand, assuming responsibility for CNH Industrial’s agriculture segment from Michele Lombardi, in a new position created as part of a global restructure announced in January.

At that time CNH Industrial revealed changes to its organisational structure across the five segments of its operations, in a bid to become closer to its customers, streamline decision-making processes and encourage faster and more market-focused innovations.

Mr Stannett has been leading CNH Industrial’s captive finance business in Australia and New Zealand for the past four years.

“This restructure has come about because our industry is experiencing a period of accelerated change – automation and digital technology being key examples – so we need to make the changes that will secure our reputation for innovation and excellence into 2020 and beyond,” he said.

TRIMBLE has upped the ante in the selective spot spraying market with the launch of a new generation of its WeedSeeker platform. The new generation WeedSeeker 2 spot spraying system is showing a lot faster response down to a two-centimetre weed target at 20km/hr.

The WeedSeeker 2 spot spraying system has involved a complete redesign and introduces a number of new improvements and features, whilst also maintaining popular traits of the original product.

McIntosh Distribution’s Jonathan Bent said testing in North America, Australia and Argentina had shown strong results with the new technology and demonstrations were now under way in Australia.

“WeedSeeker 2 is showing a lot faster response down to a two-centimetre weed target at 20 kilometres per hour,’’ he said.

The new WeedSeeker 2 sensors are 50 per cent lighter and are now spaced at 50-centimetre intervals.

“There are effectively 30pc fewer sensors, adding up to a significant reduction in overall weight on booms, and they line up with most common sprayer nozzle spacings, allowing ease of plumbing.’’

WeedSeeker 2 continues to use two light sources, both infrared and near-infrared, for the detection of all weeds linked to the chlorophyll present.

“The dual frequency light band has proved to be important in dusty conditions and where the background can change,’’ Mr Bent said.

THE new Claas Lexion 8000/7000 series of combine harvester will make its Australian debut at this year’s Henty Machinery Field Days in southern NSW on September 17-19.

Claas Harvest Centre product manager – Lexion, Steve Reeves, said the 8000/7000 was more productive, more efficient and easier to operate than ever before.

“This is not a new series – it’s effectively a new machine,” he said.

“Every aspect has been re-engineered to meet the needs of today’s grain producers – increased efficiency and ease of operation and reduced downtime and operating costs.” The Claas Lexion 8000/7000 series of combine harvester will debut in Australia in September.

BUILDING on the best features of the 1990CCS air seeder, John Deere has introduced the redesigned N500C Series air drills for 2019.

“The N500C Air Drill was designed to give operators much easier meter access, and the latest in integrated technology for improved seed placement accuracy, control and confidence, to help them do the best seeding job possible for cereals, canola, soybeans and other crops.”

On the N500C, the main frame and commodity tank have been changed, with the blower now mounted in the forward position and a raised platform, to give operators easier meter access to clear blockages or clean out seed.

New technologies that have been added to the N500C include John Deere ActiveCal tank scales for on-the-go seeding calibration from the cab, RelativeFlow blockage for row-to-row seed-flow monitoring, TruSet down force control from the cab, and the SeederPlus app for convenient calibration of meters and weight monitoring for tank scales. The partnership will see Stoll’s Australian-manufactured tow-behind sprayer range stocked at all dealerships.

“There’s definitely a demand for tow-behind sprayers across our network. We’ve listened to this and are now proud to be working with Stoll. As an Australian company who manufactures in Wagga Wagga, we know Stoll has a product that’s designed for Australian conditions in terms of climate, environment and industry,” he said.

O’Connors’ introduction of the Stoll franchise joins another two new brands available from their dealerships, with the company also increasing tillage options by introducing Horwood Bagshaw and Flexicoil to their range. O’Connors has introduced Australian-manufactured Stoll boomsprays to its stable.

CASE IH has announced a number of updates and improvements for its new Steiger 2019 tractor models.

The tracks on the 400, 450 and 500 Steiger Rowtrac have been upgraded, allowing for the machines to travel up to 40 kilometres/hour with no weight restrictions.

The improvement comes from a change to the material on the outside of the roller wheels and a change to the tracks themselves, with the two combining to allow for the increase in weight and speed.

Case IH high horsepower product manager, Alyx Selsmeyer, said with the higher temperatures in Australia and more hours in the field than other markets, this was an important change for customers.

A new air intake system for the engine has also been introduced with the aim of enhancing air flow, with the new design and appearance improving filter life in many of the challenging field conditions in which the Steiger is used.

There is also a new fully-cast undercarriage system designed to boost tractor strength and durability.

“The previous undercarriage had 20 pieces welded together to make one structural unit, while the new unit is one cast structure which eliminates stress concentration points associated with welded joints,” Ms Selsmeyer said.

Saddletanks will come standard on MY19 Rowtracs, increasing the fuel tank capacity by 340 litres, and the increasing technology demands of customers hasn’t been ignored either.