QUAD bike and utility off-road users must now wear helmets when riding on roads or road-related areas in Queensland under new laws that came into effect today. 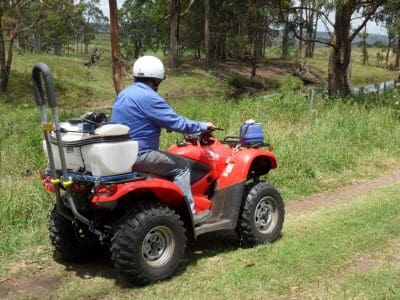 “Quad bike riders and their passengers are now required by law to wear an approved motorcycle helmet when operating on roads and road-related areas,” Ms Grace said.

“Passengers on quad bikes and utility off-road vehicles also must be at least eight years old and able to reach the designated foot pegs or sit with their feet flat on the floor.”

Main Roads and Road Safety Minister, Mark Bailey, said while most quad bike and utility off-road vehicle use occurred off-road, the government was hopeful there would be educational and flow-on benefits from the new rules.

“A quad bike rider’s trip might only see them on a road or road-related area for a short time,” Mr Bailey said.

“However, the convenience of wearing a helmet for the whole trip might result in riders getting into the habit of wearing helmets when off-road.”

Mr Bailey said both amendments were based on recommendations made in a coroner’s report in 2015 following an inquest into quad bike accidents.

“The requirement for helmet use has been in place since November 2015 as part of the conditional registration scheme for quad bikes, but will now be enshrined in legislation,” he said.

Riders not wearing a helmet while using a quad bike or utility off-road vehicle on a road or road-related area will be liable for a $362 fine and 3 demerit points.

If a rider commits a second or subsequent offences within a 12-month period, they will also receive double demerit points.

There have been 1500 quad bike-related hospitalisations in Queensland in the last five years and 69 fatalities in the last 15 years.

Safe Work Australia reports that over the six-year period from 2011 to 2016, there were 106 fatalities involving quad bikes in Australia.

Of those fatalities, 49 per cent were of workers and 51pc were people riding recreationally.

The ages of people killed on quad bikes ranged from four to 94 years with the median 46 years.

Males made up the majority (84pc) of all quad bike fatalities.