Wet ground and waterlogging in many regions have prevented farmers getting their ground rigs onto paddocks for vital post-emergent herbicide, fungicide and fertiliser applications.

With many taking up the option of flying product on, aerial ag operators are having one of their busiest periods in years.

In the Macintyre Valley on the New South Wales- Queensland border, owner of Air Ag at Boggabilla, Peter Travers, said all aerial operators were flat out. 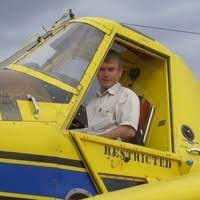 “The last time the aerial ag industry had a good time was seven or eight years ago. This rain has given us a huge resurgence,” he said.

“Everyone is in the same situation, including our clients who can’t find people to drive tractors.”

Mr Travers said continual falls of rain since February had kept the soil wet, forcing growers to turn to aerial services to carry out in-crop spraying and spreading that would normally be done by ground rigs.

“We very rarely do in-crop sprays on cereals because it is not usually economically viable to pay a plane. But, they have no choice this year. The ground rigs are just cutting tracks and getting bogged,” he said.

“Normally we don’t do a lot of dryland work because ground rigs have become more cost-efficient over the last 10 or 15 years. But, because of the wet weather we are getting the calls.”

“There are crops that have been in the ground for a couple of months. So far it has been in-crop herbicide sprays,” he said.

“But there are chickpea crops now that are getting fungicide sprays.

“Within the next couple of weeks we will start doing fertiliser applications.”

Aerial operators were kept busy over the past 12 months flying on mouse baits to combat the mouse plague that has hit vast stretches of the cropping belt.

However, there has been a lull during winter with decreased mouse activity due to the cold, wet conditions. But, analysts are monitoring the situation closely as there is potential for numbers to build again in spring.

Mr Travers said the irrigation sector was the industry’s “bread and butter” which kept business going all the time.

But under the Murray Darling Basin plan, he said the farming sector had lost a lot of its water entitlements which was starting to become noticeable in the irrigation valleys.

“There is definitely a reduction in the amount of irrigated crops that are grown over the last 10 years,” he said.