A RANGE of straightforward header modifications is available to assist grain growers facing the challenge of harvesting short crops this year. 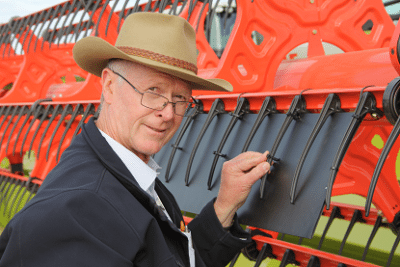 DPIRD development officer Glen Riethmuller with an example of black plastic attached to a finger tine reel, which helps feed cut material from low crops into the front of the header to reduce grain loss.

Growers in regions that have had a tough winter cropping season, such as in southern Queensland, north-west NSW and the northern and eastern sectors of the Western Australian wheat belt, are encouraged to prepare and, if required, modify their headers to capture as much grain as possible.

An estimated 20 to 30 per cent of crops in the northern and eastern parts of WA’s northern and central grain belt are expected to be sparse or low to the ground and difficult to harvest, due to delayed and below average rainfall during the growing season.

WA Department of Primary Industries and Regional Development (DPIRD) surveys around Merredin suggest that as much as 0.07 tonnes per hectare of wheat could be lost at harvest and 0.3t/ha of lupins as a result of short crops.

DPIRD development officer Glen Riethmuller said significant grain loss could occur at the front of the header, if heads or pods were mechanically dislodged from plants before entering the header.

Mr Riethmuller said the key to maximising harvested grain was to ensure a quick, clean cut to pick up and clear low-cut material.

“It is important the knives are sharp and that the knife section hold-down clips are adjusted to provide no more than a two millimetre clearance so the knife cuts at the bottom of the knife guard,” he said.

“Extension fingers that extend forward from the knife may also be useful to help catch cut material on conventional open front headers.”

Mr Riethmuller said attaching rigid black plastic to the finger tine reel was a cost effective and easy way to help feed cut material into the front of the header.

“Black Corflute is available commercially or online and should be cut to size to extend down evenly to the knife,” he said.

“It is important the ribs run down the reel fingers for added strength and to place it on every second section going around the reel, to prevent the harvest driver’s eyes from following the motion, resulting in headaches or fatigue.”

Other modifications include attaching an air reel to blow short material clear of the knife back into the table auger or belt, or attaching a Vibra-mat on tin fronts.

“There is a risk that the wind from the cleaning sieves can throw grain out or result in dirty grain when plant material is fed through unevenly and the flow is low,” he said.

“An option to mitigate this risk is to set the harvester to a low wind flow and then clean the grain with a high flow seed cleaner.”

An article on ‘How to successfully harvest short, patchy crops’ is available on the department’s 2017 growing season resources webpage along with other helpful information to navigate the 2017 season.