The strip and disc + chaff deck system conserves stubble, improves soil moisture and ticks off most of the WeedSmart Big 6 weed control tactics to reduce the risk of herbicide resistance.

HIGH residue farming with a stripper front and a disc seeder efficiently captures and stores soil moisture, and growers are finding the system can be tweaked to also improve weed management.

An increasing number of growers in the northern farming region are seeing early confirmation that the system works.

There is building scientific evidence that they are on the right track with the adoption of narrow row sowing with single disc planters, combined with a stripper front and either a chaff deck or chaff line at harvest.

Australian Herbicide Resistance Initiative (AHRI) and WeedSmart agronomist Greg Condon says this system is providing growers in the northern grains region with opportunities to plant and grow crops that would otherwise not be possible. 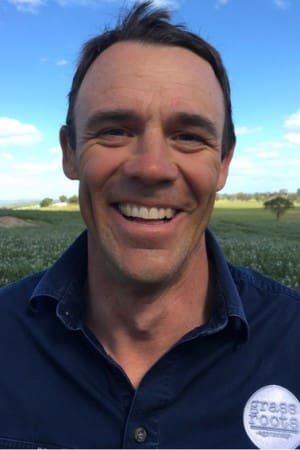 “Harvest weed seed control is a useful tactic against many of the key weed species in the northern region,” he said.

“We now have scientific data to show that, with correct harvester set-up, stripper fronts and drapers can be equally effective at collecting weed seeds at harvest.

“The advantage of the stripper front is that the vast majority of the crop residue remains as standing stubble in the paddock. This means the harvester does not have to deal with enormous amounts of plant material and there is so little straw going through the machine that choppers and spreaders have much less work to do.

“When a chaff deck or chaff line chute is attached to the harvester, the weed seed is separated from the grain with a small amount of chaff, and deposited either on the controlled traffic wheeltracks or in a narrow band behind the harvester. These weeds can then be subjected to targeted control tactics applied to a very small percentage of the paddock area.”

For some growers, like Peter and Kylie Bach farming at Pittsworth on Queensland’s Darling Downs, using the stripper front and chaff deck combination in their cereal crops has gone a long way toward solving their problems with volunteer crop plants from previous seasons.

“The standing stubble has given us planting opportunities for summer crops that would not have been possible after a conventional harvest,” Mr Bach said.

“Barley stubble provides an excellent environment for planting mungbeans and when the mungbeans are harvested, the paddock has much better ground cover with the previously-standing cereal stubble being retained on the soil surface.”

The Bachs find the barley stubble can persist for a few seasons after the growing season, providing soil moisture conservation benefits in their summer cropping program. Peter and Kylie Bach, Kurilda Ag, Pittsworth use a Shelbourne harvester front and Emar chaff deck to conserve stubble and put weeds in their place.

“When weed control is integrated into an agronomic package it is possible to achieve some real synergies in the system – achieving more than just the cumulative benefits associated with each of the parts,” Mr Condon said.

“After a few years, there is a combination of standing and residual stubble in the field and stubble load is managed through the sequencing of different crops, without ever leaving the soil bare.”

The ground cover benefits of cooler, moist soil opens up the possibility of sowing early and growing longer season crops, and even double cropping is some environments. There is also better nutrient cycling and improved soil biota activity.

While the stripper front has several benefits and efficiencies over the conventional draper, these benefits are not likely to support a change-over until existing machinery is due for replacement, according to an economic study by Holmes and Sackett consultant, John Francis.

A draper can achieve many of the same standing stubble benefits and harvest efficiencies as the stripper front if the harvest height is set at 40 to 60 centimetres.

For both options to be effective for weed seed collection the crop competition must be strong to force weeds to set seed high in the canopy.

Grower experience suggests that stripper fronts have a distinct advantage when it comes to picking up fallen or lodged crops and weeds.

Having seen the ‘strip and disc’ system working well on South Australian farms several years ago, a number of growers in southern NSW adopted the concept and are constantly making modifications to suit their soils and rotations. Three-step implementation of the ‘strip and disc’ system

Disc seeding helps retain soil moisture at sowing in a no-till farming system and does not generate hard-to-manage clods at the surface like tines often do. The extra moisture enables calendar sowing at the earliest planting date suited to the crop and region.

For best results with single disc seeding it is essential to exert sufficient downward force to achieve even soil penetration in a zero-till system. It is important to use sharp discs and seed firming wheels to help close the furrow.

Likely challenges are associated with potential hairpinning of stubble, inadequate seed-soil contact, and blockages if clumps of residue have been left after harvest. Diligent maintenance of the planter and discs is essential, insect pressure can be greater, especially in canola, and there are fewer pre-emergent herbicide options due to the higher stubble load.

Tynes are often preferred for crop safety in low to moderate stubble situations, but are not well-suited to the narrow row spacing that is an integral component of this system for integrated weed management.

Narrow row spacing increases cereal and canola yields by 1 per cent for every inch reduction in row spacing. Using a 16.5–19 cm (6.5–7.5 inch) disc seeder, growers can achieve increased cereal yields, more even ground cover and any weeds that are present will produce less seed.

Using the same established plant number as a wider row configuration, narrow rows force weeds to grow taller and set their seed higher in the canopy, where they are more easily captured at harvest.

A rearwards rotating rotor with stripping fingers strips grain from the grain heads. The stripper front threshes 85pc of the grain, leaving only a limited amount of chaff (including weed seeds and small grain) to go through the harvester. The tall stubble provides shading of the soil surface, improving moisture conservation and fallow efficiency.

Stripper fronts only work well in high residue crops. They are best suited for use in cereal crops sown on narrow rows (less than 250 millimetre spacing), and generally don’t work well in canola or pulse crops.

A stripper front harvesting a cereal crop at a harvest height of 60cm, uses 50pc less fuel than a draper front operating at the conventional height of 20–40cm. The harvester can harvest 50–70 tonnes/hour because there is far less material to be processed through the machine, which also means there is less wear and tear and lower maintenance costs.

A stripper front can be just as effective as a draper at collecting weed seeds retained at harvest. This means that harvest weed seed control tactics can be implemented, directing weed seed into the chaff stream to be deposited in a narrow band on the wheeltracks or behind the harvester, rather than spread across the paddock. The stripper front must be set up correctly to minimise grain (and weed seed) losses out the front.

Because so little crop residue goes into the harvester when a stripper front is used, there is no need for a MAV or Powercast stubble spreader attachment, saving on capital and running costs.

For more information about the ‘strip and disc’ system to manage weeds, visit the Weedsmart website: www.weedsmart.org.au

Three-step implementation of the ‘strip and disc’ system was presented by Greg Condon at WeedSmart Week 2018, Narrabri, NSW.