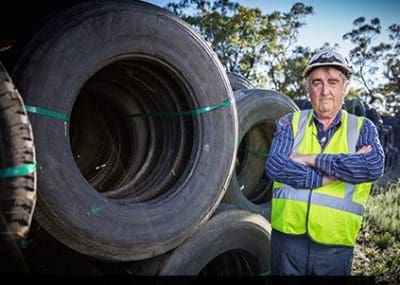 AUSTRALIAN company Green Distillation Technologies has developed ground-breaking technology that converts rubber tyres into bio-oil, carbon and steel, helping solve the global environmental problem of what to do with millions of used tyres each year.

There is a tyre dump in Kuwait so vast it can be seen from space. Millions of old car, bus and truck tyres have been dumped here after reaching the end of their lives, many sent from other countries.

Since pneumatic (air-filled) tyres were invented in 1887, disposing them has presented a problem. With more than 1 billion tyres produced each year, taking an estimated 500 years to break down, it’s an industry with a big waste challenge.

Some tyres are reused in things like asphalt roads, kids’ playgrounds and racetrack crash barriers.

But this still leaves millions languishing in graveyards around the world, creating fire hazards and a long-term, global environmental problem.

Despite many attempts, there has been no economically viable way to effectively recycle rubber tyres – until now.

Established in 2009, Australian company Green Distillation Technologies (GDT) has developed world-first technology that converts tyres back into high-quality, in-demand oil, carbon and steel. The technology recycles 100 per cent of every tyre and presents enormous potential. 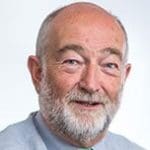 “And in the course of that, it makes them incredibly hard to do anything with once they [reach end of life].

“Vulcanised rubber is such that if you turn it into another product like playgrounds or mats, at the end of the day you’ve still only got rubber – so you’re only reshaping the landfill. What you’re doing is delaying the inevitable for somebody else.”

Old tyres can cause air, water and ground pollution, and can damage landfill linings as trapped methane causes them to bubble to the surface.

Beyond the environmental issue, after rain old tyres become a breeding ground for mosquitoes and a source of disease.

What makes it so ground-breaking is that it is the first method to be developed that turns tyres into high-demand raw materials, and without producing any emissions.

In 2015, GDT was recognised by the US-based Edison Awards, the world’s top award for innovation, becoming Australia’s first-ever nominee and taking home a bronze.

“For us, this was a monumental achievement. We’re a tiny little startup – in 2015 there were probably 10 or 12 of us – and here we are conquering the world. Everyone in the company wanted to hold the trophy,” Mr Bayley said.

The destructive distillation process begins by loading whole tyres into a process chamber, which is evacuated of air and sealed.

Heat is then applied, which drives the chemical reaction, breaking the tyre down into different compounds, one of which is collected and condensed into ‘manufactured’ oil. At the end of the process, the carbon and steel are extracted, cooled and separated.

The process is entirely emission-free because all vapours are captured and condensed. The exhaust stream is cooled and washed before it is let out, leaving it well below required limits.

GDT makes the process even more environmentally efficient by using the manufactured oil as the heat source.

The oil GDT produces through this process is a bio-crude oil, which is similar to diesel.

“The Queensland University of Technology has tested the oil and found it can be blended with small amounts of fossil fuel, resulting in no loss of engine performance and 30 per cent less nitrogen oxide in exhaust emissions,” Mr Bayley said.

GDT sells its oil to a refinery, which in turn converts it into a renewable, highly efficient fuel for diesel engines.

Mr Bayley said the oil could also be used as a heating fuel or further refined into an aviation jet fuel.

The steel commands a high resale price and is sold back to tyre manufacturers for reuse. The carbon, meanwhile, is a high-grade product that can be used in place of carbon sourced from fossil fuels, although GDT is yet to firm up a market for it.

“The carbon is our sleeping giant,” Mr Bayley said.

In tests by the University of NSW, it was shown to be highly useful in industrial processes, including improving energy efficiency in the steel recycling industry.

Rewriting the future of tyre disposal

This environmental success story came about somewhat by chance, when Mr Randall, a scientist and passionate inventor of waste-to-renewable-energy technologies, discovered the destructive distillation process after more than 35 years of study and experimentation.

He initially used it to recycle agricultural waste, but recognised that the process would work with any material containing carbon.

When he crossed paths in 2009 with Mr Bayley and GDT’s CEO, Craig Dunn, they quickly realised the potential to address the world’s tyre problem.

GDT has one plant in its early stages of operations, located near Warren in western NSW, with plans to have it running at full capacity soon. 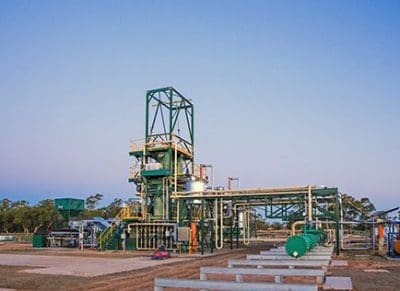 Mr Bayley said a single plant can process 19,300 tonnes of tyres per year, which equates to roughly 658,000 tyres.

The company plans to establish another six plants, once it is able to raise the necessary funding, eventually giving it capacity to recycle around 26 per cent of Australia’s available end-of-life tyre market.

Uptake in Australia has been steady; however, GDT has attracted “huge” interest from international companies keen to establish joint ventures, including in the UK, US, Japan, Thailand, Russia, Chile, Argentina, South Africa and Qatar.

GDT hopes to eventually manage as much as 30 per cent of the global end-of-life tyre market. That’s roughly 420 million tyres per year being converted into usable and in-demand materials via an environmentally sustainable process.