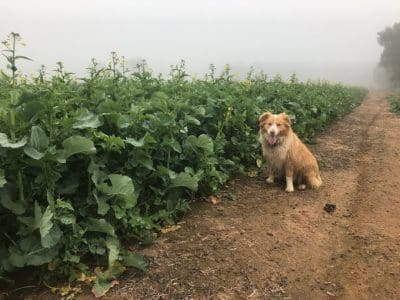 Eva checks out the progress of a HyTTec Trophy canola crop at Junee. Photo: Angus Knight

EXPORTS of Australian canola have slipped to a six-month low in June to reflect the usual seasonal rundown on stocks, and the focus of European crushers on their own region’s crop.

Latest data from the Australian Bureau of Statistics shows June exports of Australian canola totalled 16,290 tonnes, less than half the May total of 35,757t, with China on 9600t the biggest volume buyer for the month.

Trade sources have said this was Western Australian canola, and most of it has been shipped to Cargill’s crushing plant in Newcastle, which looks set to receive a further 25,000t cargo scheduled to load in coming days at Kwinana.

It may well tide Cargill’s Newcastle plant over to new-crop, which will become available in November. The plant is the biggest crusher in NSW.

NSW last year produced a canola crop of around 200,000t, less than half of what it is forecast to produce this year, provided spring weather is kind and allows the state’s crops centred in southern regions to realise their yield potential.

They are flowering and podding at present with limited subsoil moisture beneath them, and will suffer if frost hits, or if the showers which have been ideally timed so far cut out.

As with last year, canola area is down dramatically in central and northern NSW due to a lack of planting rain.

However, crops in most parts of WA, South Australia and Victoria have average or above-average yield potential, and this will provide adequate tonnage for Australia to supply its export and domestic customers.