INDIA might have a big local crop in the pipeline, but its pressure is yet to be felt on Australian chickpea prices, which have surprised everyone by surging to $1000/tonne, up $200/t in the past month. 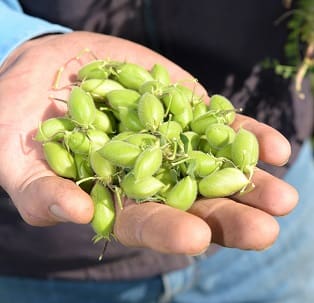 Trade sources say the jump has been caused by logistics issues in getting India’s crop from where it’s being harvested to markets in southern India, the same scenario which is currently supporting demand for Australian wheat into India.

India is heavily dependent on pulses for food.  Its chickpea production in 2017 had been forecast by the Indian Government to exceed substantially the 2016 crop.

Mr Chandrashekhar said in his report such a big jump in production logically should have led to a sharp cutback in imports, but surprisingly the country’s pulse imports continued to surge.

“Clearly, demand is driven by plentiful availability and consumer-friendly market prices. Income and price elasticity of demand is clearly in operation, showing yet again how underestimated was India’s potential consumption need.”

India’s pulse imports were set to register a new high this year, greater than in 2015/16 when India produced less and had faced a huge shortfall.

Will it last through current crop?

Trade sources in Australia said prices were likely to fall as supply-side pressure from India’s chickpea harvest, centred on the northern states of Madhur Pradesh, Rajashtan and Maharashtra, came to bear.

Today’s reality is that desi chickpea  prices of A$1000/t delivered packer in Australia, plus a premium for carry into later months, are luring farmers to sell their remaining stock of chickpea.

The strength in enquiry is giving opportunity to price chickpea for delivery months from now until new crop.

“Australian growers now finalising seeding plans should assess the risk of planting chickpeas this year on the back of attractive prices today,” Pulse Australia chief executive officer Nick Goddard said.  “There’s a chance of values trending lower as the year progresses.  Having said that, all indications are that the area could well be on par with last year.”

Growers’ and traders’ started negotiations on new crop pricing over a month ago, commencing with values around A$800/t delivered packer.

New crop prices on offer this month for fixed tonnes, fixed delivery period October and November 2017 have been in the range of A$800/t to A$850/t delivered, according to a number of trade and grower sources.

Flexible contracts — with variables allowing growers flexibility including area yield and delivery period — have been negotiated at discounts between around 5 per cent and 10 pc below fixed contract terms.

Pulses internationally are characterised by the dominance of India as a producer and a consumer.  The evolution of demand for Australian chickpea is strongly influenced by India.

The system of agricultural commodity pricing — managed by the Government of India — has included measures such as minimum support pricing (MSP) and tariff.

Tariffs, in the form of import duty, were re-applied last week to wheat and for the first time to pigeon pea (e.g. from Africa) at the rate of 10pc.

While the harvest in India this year had every chance of being much larger than last year, it would still not have returned to ‘typical’ — around 11 to 12Mt — level, according to a trade source.

Additionally, demand into the region collectively described as south Asia has had the effect of pushing Australian trade this year slightly further than normal;  an outcome hardly surprising since the regional shortfall in pulse production faced by populations during the past two seasons.

1 Pulse Market Report is a publication of Saskatchewan Pulse Growers