A LACK of liquidity in most new-crop feedgrain markets is supporting values, while current-crop rates have eased as some growers and traders quit stocks amid consolidating prospects for wheat and barley crops in Victoria and adjoining parts of New South Wales and South Australia. 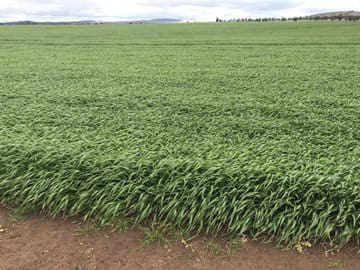 This crop of Planet barley at Charlton is one of many in the state to be looking at above-average yield potential. Photo: Kris Dixon, Landmark Donald

Robinson Grain trader Michael Golden said current-crop grain prices had softened in the past week by around $5 per tonne.

“That’s because the farmer in Victoria and southern NSW has decided to sell surplus inventory,” Mr Golden said.

This selling is believed to have been spurred on by consolidating yield prospects for most cereal crops south and west of central NSW following handy falls of up to 30 millimetres in the past week, and is generating some cash flow for the new financial year.

“It’s the opposite for new-crop. Farmers are conspicuous in their absence.”

Softness in international grain markets has filtered through to export-focused new-crop pricing in Western Australia and central and western zones of SA, but has failed to infiltrate eastern-states markets.

These are focused on yield outlooks for crops in the lower Lachlan Valley, which are looking less hopeful than those in districts south.

If the second half of winter brings adverse growing conditions to troubled crops, a spike in grain prices can be expected as consumers look to cover their positions.

South of the River Murray, most crops are flourishing.

“Some pockets of the northern Mallee have been very dry all along, and they haven’t picked up any good falls in the past week, but a lot of the crops in Victoria are in good to very good condition.”

Mr Sidley said most Victorian growers were looking at potential feedgrain demand from the north, and were not inclined to accept new-crop bids currently available.

These are sitting at around $310/t delivered Melbourne for ASW wheat, and $280/t for barley.

In the current-crop market, ASW wheat for prompt delivery into Melbourne has been trading at around $360/t, unchanged from last week, but barley has dropped around $15/t to $350/t.

“End-users of barley are buying bits and pieces.”

In new-crop, APW wheat in the Port Kembla track market has been trading at around $350/t for December-January delivery as export prospects improve based on healthy yield prospects for most southern NSW crops.

In southern Queensland, end-users on the Darling Downs and Western Downs have continued to price limited amounts of new-crop wheat to supply feedlots at $380-$390/t delivered for January forward, and barley at around $355/t.

“End-users aren’t worried about availability of current-crop wheat, though they are watching the barley supply closely, especially at the crossover of the seasons in September-October.

“Barley from WA could get tight then, and prices in the east which usually transition around October based on local harvest will this year be making the new-crop transitioning based on WA/SA supply.”

In Central Queensland (CQ), growers harvesting sorghum have been selling into a market which has softened in the past week now that the region’s end-users, and those in North Queensland, have largely covered their requirements.

CQ’s wheat harvest will gain momentum by around mid-September, and is expected to be a major supplier to domestic users throughout Queensland and possibly into northern NSW.

“Some CQ sorghum is filtering into southern Queensland, and ex farm CQ prices are $260/t, which has dropped from $280/t,” one trader said.

Trade sources said the softer sorghum market was likely to prompt CQ growers with any unsold tonnage to hold it until after their wheat was harvested and sold, and supply-side pressure was minimised.

The ex-Brisbane free-on-truck market has weakened a little, with wheat a few dollars below $380/t, and barley a few dollars above for August pick-up.

The August delivered Downs market was around $400/t for wheat and $405/t for barley, mostly in line with WA replacement value.

The August delivered-Downs sorghum market is trading in limited volume at $335-$340/t.

Grim prospects for next year’s cotton crop amid low dam levels and no water allocations have done little to stimulate trade in cottonseed this past week.

“Ginning will be coming to a close in the north in maybe another two weeks and while there’s still six weeks of ginning to go in southern locations such as the Riverina, there’s virtually no price movement and it seems nothing will shift values either way.”

The ASX feed barley (UB) contract was untraded this week.  Its Jan 2020 contract on Wednesday settled at $276/t and open interest was 545 lots unchanged from the previous week when its settlement price was $274.50/t.