PRICES for wheat, barley and sorghum have dropped around $10 per tonne in the past week in response to tumbles in US futures values, and consolidating prospects for the Western Australian crop which is receiving welcome rain now, and has more forecast into the weekend. 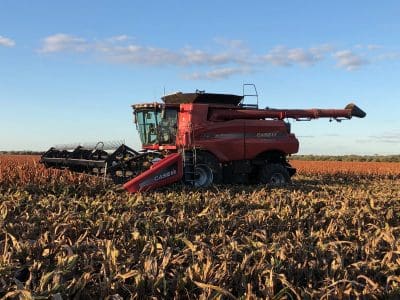 The easing in values has further reduced selling interest from growers in eastern states, who see the ongoing dryness in northern New South Wales and southern Queensland as bullish for new-crop prices.

ADM accumulation manager Michael Vaughan said grower selling has been limited in the past week, despite the ticking over into a new financial year.

“The delivered wheat market is pretty flat, and we’re not seeing much grower selling,” he said.

“The cupboard is getting quite bare in terms of old-crop, but there are a few parcels of warehoused grain trading in the Port Kembla zone.”

This covers much of southern NSW, where barley ex-store for prompt pick-up has been trading at $365-$370/t, and wheat is trading at around $380/t ex farm.

In the new-crop market, barley in southern NSW is showing a hefty discount to wheat, but both are still seen to be well above export parity based on continuing drought demand in inland Queensland and NSW.

New-crop barley delivered southern NSW has been trading in limited volume at around $260/t, and wheat is changing hands at around $315-$320/t.

“Because Australia is in such a low supply situation, there’s support for local values, and wheat is well over export parity.”

“The local markets have softened over the week with Chicago futures having taken a beating,” he said.

Sorghum has been trading at $340/t for prompt delivery to Downs end-users, primarily in the bio-refining, poultry and pig sectors.

“There’s not a whole lot left in growers’ hands, and what is there, growers want to see $350/t for.

“I don’t know if that will happen now that the WA grower is coming to the market.

“New-crop wheat and barley are down $10/t and sorghum is following.”

The Central Queensland (CQ) sorghum crop is being harvested in a wide window this year due to staggered planting dates, and is selling in the prompt market at around $300/t on-farm.

Carpendale Transport and Commodities manager in Toowoomba Andrew Jurgs said wheat from CQ’s southern grower regions was pricing into feedlots in the Western Downs and Maranoa, and will feature in rations from late September onward.

Mr Vaughan said wheat from CQ’s northern growing areas was likely to be consumed in the CQ and North Queensland market by feedlots, piggeries and poultry farms.

New-crop CQ wheat is being sold by growers at around $350/t for September-October delivery.

Barley normally trades at a discount to wheat, but in the current-crop market, it has been trading at parity to $3/t above wheat as traders cover some short positions in the delivered Downs market.

New-crop barley’s discount to wheat reflects ample northern-hemisphere supplies from its harvest which is currently under way, uncertainty about China’s draw on new-crop Australian barley.

“If you look at values in the latest Saudi tender, WA barley looks very much over-valued,” Mr Jurgs said.

Traders and Queensland feedlots are continuing to buy parcels of new-crop WA wheat and barley ex Brisbane port, but volume is limited, probably because buyers see more downside than upside in the market based on the global supply-and-demand scenario.

“Queensland consumption looks like it isn’t going to weaken in the next six to 12 months, and the WA trader might be looking to Queensland unless the world wheat markets wants to drop US $10-$15/t.

The caveat on recent price softness whether dry conditions start to impact crops in South Australia, Victoria and southern NSW.

While they are largely on track to produce average yields, many have limited subsoil moisture to draw on should conditions turn dry.