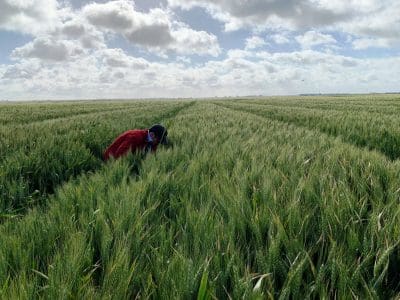 Wheat-yield expectations are high and harvest is still some weeks away in south-west Victoria.

PRICES for wheat and barley have lifted this week following rain across south-eastern Australia which has delayed harvest and left some consumers scrambling for wheat.

A shortage of wheat available to Victorian consumers in the near-term has kept its inverse alive, with prompt slots trading at up to $40/tonne over deferred delivery, but rises have been much smaller in northern markets.

Victoria’s Melbourne Cup holiday on Tuesday, as well 10-20 millimetres of rain in the grainbelt, has further tightened the market.

The kick in the market reflects a lack of grower selling, and the decision by many in the trade to take a short position at harvest in the knowledge that wheat and barley from farms southern Victoria and South Australia, and ex Western Australia, will be plentiful.

In New South Wales, falls of 15-50mm fell over much of the state’s growing areas, but with the drought-affected harvest well advanced in central and northern districts, it will do little to help yields anywhere outside the southern slopes.

On the Darling Downs of southern Queensland, ASW wheat has traded for November-December delivery at $424/t, up $4/t from last week, while new-crop is steady to $2/t higher at $416/t for January delivery.

New-crop barley delivered Downs at around $370/t is steady to slightly cheaper on last week, and is getting close to export parity.

Emerald Grain trader Scott Merson said small amounts of Central Queensland wheat could still be making their way into feedlots on the Western Downs and Maranoa, but the Darling Downs and northern New South Wales were switching attention to Victorian grain.

“What they wanted to sell has been done now, and they did a good job of capturing the inverse.”

The first loads of new-season Victorian barley have made their way into the New England region of northern NSW, with the grain now competing with the free-on-truck market for WA grain ex Brisbane and Newcastle port.

“We are seeing some grain moving north, and the market’s feeling a little bit stronger this week.

“Global prices are firming, and we are probably US$10/t from being able to do export volume.

“That world price is showing us where the floor in the market is.”

In the sorghum market, small parcels are trading to Downs consumers in the low $400s for November-December delivery.

Wilken Group trading manager Andrew Kelso said the recent rain had delayed the start of harvest in most areas, and the continuation of it in earlier districts.

“Everyone’s waiting for harvest to get going.

“Not much will happen for another week or two, though they might get going on barley in the Mallee before that.”

“Old-crop barley has a small premium over the new-crop, but it’s nothing like wheat at the moment.”

“The consumer’s not worried too much about barley.”

Many loads of early new-crop barley have come in from a drought-affected finish, and high screenings have given them F2 and F3 rather than F1 specifications.

This downgraded barley has been disappearing straight into the grazier market on the tablelands of NSW from the Monaro to the New England, and has also been going to sheep feeders on the northern and central slopes and plains of NSW where they were unable to grow their own grain.

In the Riverina market in southern NSW, ASW wheat is trading $350/t, $20/t above January, to reflect the shortage of wheat available straight off the header.

Growers delivering to bulk handlers are reported to be warehousing rather than selling for cash, with low yields and spot demand meaning most have no need to deliver to public storages.

Once harvest gets going in the southern Mallee and Wimmera of Victoria, where high yields are expected, that trend is likely to change, particularly if export demand for feed barley materialises.

Early indications from the WA harvest point to high proteins in wheat and barley in the Geraldton and Kwinana zones, and a low proportion of ASW-type wheat being delivered.

This is in stark contrast to last year in WA, when the gentle growing season saw big yields and very low proteins dominate.

Open interest, a measure of market activity, fell a little. Moves in open interest can indicate participants joining or exiting the marketplace.

The eastern wheat (WM) January 2020 contract was mostly a little firmer, trading lightly on only two days during the week, totalling 279 lots.  It settled on Wednesday at $337/t, unchanged from a week ago. Open interest fell to 12995 lots from 13583 lots a week earlier.

Both markets revealed a window into people’s handling of uncertainty as spreads were seen to shift during the week.

The wheat price versus barley price spread also widened.  Wheat two weeks ago was a premium of $65/t to barley in the January contract, while this week it was between $65/t and $70/t.  In the March contract the wheat-barley spread two week ago was about $60/t and during this week the spread has widened to $60-65/t.