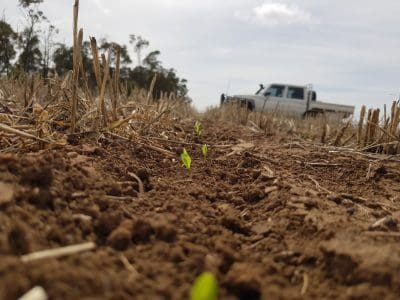 Some growers on the Darling Downs and in northern New South Wales have planted sorghum later than normal on recent rain. Photo: Phillip Hayward, Warra

PRICE softness in the national domestic feedgrain market is yet to be seen as offers out of Western Australia on wheat and barley firm on export demand, and an unaltered sorghum supply situation in the near term.

China, which is rumoured to have booked 300,000 tonnes of Australian wheat for February-March shipment, appears to be the volume buyer, and the sale has further tightened the domestic supply.

While rain in parts of southern Queensland and northern New South Wales has sparked some planting of sorghum, its prospects are shaky.

On the Liverpool Plains, Agracom director Brett Donoghue said most farms have had 40-180 millimetres of rain in the past fortnight.

“It’s been extraordinarily patchy, and there’ll be no more sorghum planted from here on in if you didn’t get it in in mid-January.”

Uneven germination, frost, ergot and a lack of follow-up rain could all decimate yield prospects for sorghum planted past the usual cut-off point in December, but farmers have the option of making money out of struggling crops by grazing them or cutting them for silage.

Most growers in summer-crop areas are hanging on to subsoil moisture and hoping for at least another 100mm of rain so they can plant winter crops from April onwards.

Feedlots continue to be major consumers of barley, with the demand supporting prices while China’s investigation into historic pricing of Australian feed barley progresses.

“There is more barley to move, and the feedlots have identified that.

“We’re staring at our lowest carry-out in history, and if these exports don’t slow down, we could see some interesting prices.

“The track markets in WA, SA and Vic are already strong.”

The February delivered Darling Downs market for wheat is trading this week at $475-$480 per tonne, with barley at $420/t.

This compares with sorghum for March-April Downs delivery at $485-$495/t, dropping to $455-$460/t for June-July once CQ sorghum becomes available.

If export demand appears for CQ sorghum, the new-crop discount for June onwards would evaporate, but domestic demand only would see the red grain price into the Downs.

Trade sources have said the lack of local wheat and barley north of southern NSW, and the decision by major traders not to be volume holders of grain in this buoyant market, are enough to underpin prices at current levels.

“Unless it rains five inches across all of NSW, this wheat market can’t go down,” one Queensland trader said.

In Victoria, the trade holds little grain, most consumers have little cover, and growers continue to offer limited tonnage to the market.

“Consumers are buying hand to mouth and the grower holds probably 60 per cent of the grain,” Melaluka Trading director Simon Pritchard said.

“If the consumer wants something, they have to put their hand up.”

Increased interest from the bid side has pushed prices up a few dollars in the past week, with the February delivered Melbourne market for ASW wheat now at $385-$390/t, and barley at $340/t.

Trade sources have said Victorian growers were likely to sell their next few loads of grain in March or April, when many growers will head to Geelong, Melbourne, Portland or an up-country depot with a load of wheat or barley, and come home with a load of fertiliser.

With major traders unlike to accumulate a long position ahead of a widespread break in the season, downside cannot be seen in Victorian prices for now.