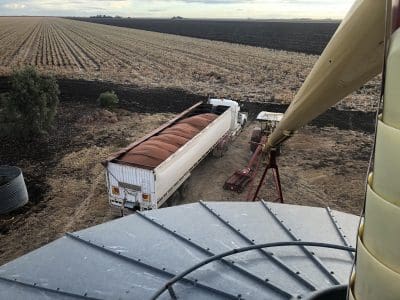 Darling Downs growers are putting most of the sorghum from the current harvest into on-farm storage. Photo: Peter Waddell

LIMITED grower selling has helped the sorghum market maintain values in the past week, but wheat and barley prices had a turbulent week as millers and traders worked through stocks.

Horizon Commodities trader Aaron Jones has estimated the Darling Downs sorghum harvest is around 80-per-cent complete, and says SGM1 for March-April Downs delivery has been trading at $348-$355/tonne in the past week.

“Sorghum can’t rally while wheat and barley are under pressure, and the grower is happy to sit on what they’re harvesting because they’re not seeing rain coming, and there are some concerns they won’t get a winter crop,” Mr Jones said.

A steep drop in US futures values has added to the softer tone for wheat, which is now available for prompt delivery to the Darling Downs at $415/t, about $30/t down from its December levels.

“Wheat’s getting cheaper around the world.”

Sorghum coming on to the market is largely going to the poultry sector, or the Dalby Bio-refinery for ethanol production.

Feedlots are believed to be at capacity, and have covered their near-term needs with wheat and barley arriving either by ship from Western Australia, or by train from South Australia.

In its Monthly Receivals Report, South Australian bulk handler Viterra said it received 11,705t of grain into its system between 4 February and 3 March, to take total receivals for the 2018-19 harvest to date of 3.99 million tonnes.

In the past month, Viterra said it had loaded more than 2500 trucks to supply domestic end-users in South Australia, New South Wales and Victoria, five trains with wheat and barley destined for east-coast use, and export cargoes at Port Lincoln.

The massive spike in feeding demand last spring and summer has stopped, and a trader said production volumes for stockfeed millers were ‘back to normal” in New South Wales.

Stockfeed processors operate on their baseline demand most years, and 2018 will be remembered as an exceptional year which saw drought demand crank up volumes.

The spike was always going to come to an end, and now it has, with most growers thought to have taken full advantage of high prices throughout the harvest which defied the usual supply-side pressure.

Consumers also took good cover at harvest prices, punting that the eastern-states summer crop would not amount to much.

Sources have said meantime the profitability of fat lamb production had fallen, closing a previously profitable outlet for stockfeed and supplements.  Those with grain on hand were finding grain stock would last longer than they earlier thought.

The throttle appears still to have not yet opened on new-crop cottonseed supply, and current-crop seed remains scarce.

Central Queensland gins have been operating for some weeks now and Woodside Commodities manager Hamish Steele-Park said some outer western gins were expected to start soon.

“Not all gins will be operating this year due to smaller crop,” Mr Steele-Park said.

The imminent supply from gins starting in March has done nothing to ease the market.

A huge inverse still exists in the market, with current-crop trading at $170-$200/t over new-crop, depending on location.

That the inverse will evaporate is axiomatic, but timing will depend on cottonseed flowing from the hoppers and seed sheds when ginning commences at most sites in the next month.

“West-coast price movements were mixed.  While most grades of wheat were weaker,  ASW1 grade traded up $5/t.

“That gain makes the eastern gains more plausible, as it has again fattened the basis for west‑east milling-wheat flows,” Mr Gorey said.