SOUTHERN Australian wheat and barley needed to fill metropolitan demand is continuing to make its way into Brisbane’s grain-processing sector by ship. 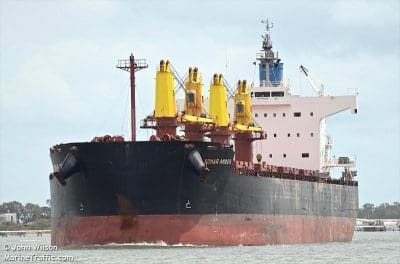 The Bomar Amber is believed to have discharged a cargo of southern Australian grain at a Brisbane berth last week. Photo: John Wilson, Marine Traffic

This follows the arrival of a 23,000-tonne cargo of South Australian barley into Brisbane in November.

“I haven’t heard anything concrete, but if you can get wheat at port in Adelaide or Thevenard for $220-$230/tonne, and add $100-$110t to get it to Brisbane where the stockfeed market is bid at $330/t, the trade should be able to bring wheat around by ship.

“It’s people with their own ports that a likely to be doing it to get some value out of their grain-handling systems.”

Mr Cunliffe said wheat delivered March on southern Queensland’s Darling Downs was trading at around $328/t, which equated to about US$268/ delivered March.

“That’s a pretty good number, and it shows the Downs market has reached import parity into Brisbane. The Darling Downs is an expensive interior market.”

“People are not going to bring it up on spec, but it’s getting to the point where pricing for road delivery into southeast Queensland is too expensive, and we’ll have to start sourcing grain from probably South Australia,” he said.

“There is some talk of shipments, because once you get to a $40-$50/t difference between southern and northern markets, it starts to add up.”

Trade sources said they believed growers and possibly traders were holding large stocks of grain on farm in the belief that values could only rally, especially in the face of lacklustre yield prospects for a chunk of Queensland’s sorghum crop.

“We want more wheat in the next couple of months,” Mr Bray said.

Demand generated by stockfeed sectors in southern Queensland has made the state a net importer of grain from NSW, mostly from producers north of Narrabri.

“Because they had such a bad season last year, Queensland’s not going to get anything like the tonnage it needs from that area.

“People are certainly looking at bringing vessels around, but really, it’s hard to make anything work into Brisbane at the moment, even from the Downs.

“There’s interest in taking a bit more cover because sorghum’s not looking too flash, and it’s wheat in that APW to feed range from South Australia that’s likely to work.”

In October, industry sources said between 1.8 and 2 million tonnes (Mt) of sorghum was likely to be produced in Queensland and northern NSW in total.

However, patchy rain in Central Queensland, where the planting window closes next month, and some moisture stress on crops planted into short fallow in southern Queensland, now have the crop more likely to yield 1.5-1.8Mt in total.

A trader said he believed two or three vessels carrying wheat and barley might work their way into Brisbane in coming months.

“Even if we got 100 millimetres of rain in the next week, it would be too late to help a lot of the early crop in terms of yield.”