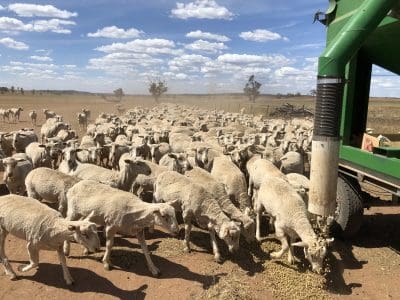 PELLETS formulated as far away as Perth are working into the New South Wales market to offer sheep producers a reliable source of nutrition for their animals as the state battles its toughest drought on record.

Travelling east by road and rail, the Western Australian pellets have been making their way into NSW since last year. The central NSW town of Parkes has emerged as a key distribution point for them.

Other interstate pellet manufacturers including JT Johnson & Sons (JTJ) at Kapunda in South Australia are also supplying pellets into drought-declared parts of NSW.

“It’s the cost of ingredients going into the mill that’s making it work.

“It’s easy to transport pellets, and people making money out of sheep are prepared to pay for them because they’re a fully formed product.

Looking ahead, Mr Rowland said he could see the flow of drought pellets into NSW continuing as the cruel season prevailed in central and northern parts of the state.

“Roughage is going to be the hardest thing to come by. I don’t think it’s a good look at all.”

Graziers have traditionally supplementary fed their sheep with hay, grain and pulses like lupins or faba beans, all of which have become extremely expensive in the majority of NSW in an area bordered roughly by Broken Hill, Forbes and Moree.

Roughage has become the most expensive input, and Mr Rowland said the fact almond hulls had jumped from the normal $40 per tonne to more like $200/t reflected that.

“They’ve more than quadrupled in price and they look like they are going to stay there.

“Soybean meal and canola meal is available, but it’s expensive to get to inland NSW too.

“Producers are finding that they can make some money by putting sheep nuts in a self-feeder and hay in a ring feeder of hay.”

High input costs have also impacted stockfeed manufacturers in central and northwest NSW, some of whom are acting as agents for interstate pellets, which are made more competitive via the Federal Government’s drought freight subsidy, or imported product.

“It’s a really rough time for people in the market.”

Barley and wheat off the boat from WA ex Newcastle and Brisbane have been selling for more than $400/t delivered central NSW all year.

However, protein levels of WA grain have sometimes struggled to make 10 per cent, and with faba beans and lupins almost impossible to find, on-farm blending to a minimum nutritional standard has been a tough ask.

Flow from the west

T&R is located at Upper Swan north-east of Perth, and sales manager Jo Wallace said it has been sending pellets and oats as drought-feed for NSW since February.

T&R has connections in Parkes, and further south at Young in NSW, to help it distribute its products. 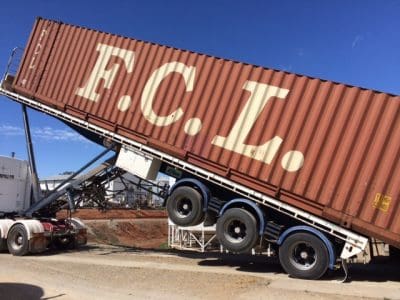 It already had a small market in NSW through the sale of its EasyOne pellets, mainly to stud breeders feeding rams with a product which would not give them acidosis.

“We’ve been sending EasyOne over for years in road trailers, but we decided to open a depot in Parkes because we were getting so much more demand from NSW.”

Co-located with the Bio-Oz facility near the railway line in Parkes, the depot is supplying pellets to customers scattered across most of NSW.

“They’re going east to the tablelands, and we’ve sent loads to Queensland, but not many.

“We’ve been sending product to Coonamble and Tamworth and as far away as Glen Innes, and to the south, we have clients in Cooma and Griffith.

“We send a lot of product to Nyngan and Tottenham and as far west as Cobar and Broken Hill.”

“Our domestic market is now that big that we’ve had to pull back on export.”

He said the company’s pellets, which include a roughage component, were helping drought-hit clients who could not get hold of fibre.

“Grain’s expensive here too, and we’ve got freight to NSW on top of it, but with prices of sheep where they are, clients are buying what we’re producing. It’s a new frontier for us.”

Mr Toovey said he believed minimum protein specifications in pellets were helping to make them a preferred source of fed.

JTJ sales manager Darren White said the company saw an upswing in demand from NSW in the middle of last year.

“It did drop off earlier this year, and in the past few months it’s increased again.”

He said the company’s pellets were all being road freighted, and were feeding into the Broken Hill, Coolah Forbes, Orange, Parkes  and Tamworth markets.

“We’ve increased our production capacities to support these areas, and keep supply our existing customers as well,” Mr White said.

In response to the NSW demand, JT Johnson & Sons ruminant nutritionist Lisa Nietschke earlier this year developed a roughage-based drought pellet to add to the product range at a price point below conditioner, ewe-and-lamb and finisher pellets.

“That’s been quite popular.”