GLOBAL wheat production will decrease 15 million metric tonnes (MMT) from 753MMT to 738MMT for the coming season, according to the United States Department of Agriculture’s (USDA) first global production forecast for the season.

The Australian production estimate is very much just an estimate, based on average trends and weather, as we come off a record year of production.

India is flagged to increase production by 10MMT, the EU by 5.5MMT and China by 2MMT. Despite global production falling for the first time in four years, it is still larger than the 10-year average, pegged at 692MMT and even the five-year average at 718.5MMT.

Offsetting the decrease in global wheat production is a drop in demand for new season global wheat, due to feed usage.

It is vital to understand where the wheat ending stocks are located to gauge the real impact of the report.

According to the latest figures, China will be holding 128MMT of the 258MMT ending stocks, or 49.6 per cent.

It’s unlikely China will ever export this back into the market, therefore should largely be excluded from our thoughts.

If you remove China from the equation, the world’s wheat balance sheet quickly tightens.

Projections are the basis for the USDA to estimate production numbers, and as May to June are typically the most dangerous months in terms of production risks, these estimates can often be wrong.

So what does this all mean for Australian grain prices? If the USDA has projected correctly, and we are set for another year of large grain production and heavy ending stocks, new crop wheat prices will likely to be subdued for another year.

However, the Australian dollar has been under pressure with further speculation the US will lift interest rates. This has helped strengthen prices over the past month for all grains.

With record exports continuing out of Australia and ongoing export demand for grain, prices are likely to be well supported for at least the short term.

The biggest risk to Australian prices will be the arrival of the northern hemisphere harvest in July.

This new supply of wheat and barley will need to price competitively against Australia to secure demand from key importing regions.

However, the level of competitive pricing from the likes of Russia, Ukraine and the EU-27 is all relative to their crop size.

Therefore, any threat to production over the next six weeks in any of these key regions will assist to keep a floor on Australian prices for the second half of this year. 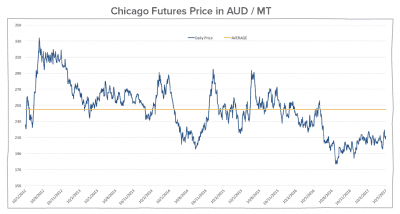 To summarise, despite the first 2017/18 wheat ending stocks publication looking bearish, it’s important to stress nearly half of this is situated in China.

Furthermore, the report uses trending yields, and if adverse weather affects yield, one would expect production and ending stocks to decrease.

The weakening Australian dollar, coupled with a record export pace from Australia has supported prices coming out of harvest and rewarded growers who delayed their grain marketing.

The biggest risk for Australian grain pricing in the second half of the marketing season sits with how aggressive Russian, Ukraine and EU-27 pricing will be to achieve the required exports in line with their production.

However, we still have eight weeks of weather risk to get through, so only time will tell.